Doors Open Waterloo, an event that lets KW residents see a usually-hidden side to their city, ran with the theme of “science and technology”  Sept. 17. With 48 participating sites this year, it was full of adventure.

One of the co-ordinators, Karl Kessler, said, “Doors Open is a chance for people to get into interesting buildings and sites around the region, many of which they wouldn’t normally be able to get into.” Doors Open has been running in Waterloo since 2003, and Kessler and his wife have been co-ordinators since the very beginning. After much hard work, they landed their dream jobs and have put every building they have wanted on the event roster. He said that he would love to add more working factories since people love seeing how things are made.

When asked about the importance of the event, Kessler said, “We live and work in buildings all the time and I’m not sure we really take the time to think about them. They shape our lives and we don’t always have a chance to take a step back and take a look at them. [The importance of this event in Waterloo is that] there have been so many physical changes, with all kinds of new buildings. We have a little bit of everything from 19th century architecture, all periods of the 20th century and now 21st century, some of which are really remarkable.”

Imprint had the chance to check out four of the open buildings. The first one of the day was St. Peter’s Evangelical Lutheran Church, at 49 Queen St. N, Kitchener. The interior of the church was beautiful, with floor to ceiling stained glass windows, and a Cathedral-esque ceiling.

The next stop was the new Google office, at 51 Breithaupt St. This former tire factory now has just under 400 engineers working there—over half are UW grads—and has a huge cafeteria, gym, and rock climbing wall inside — not to mention lots of office space.

Alexandra Hunnings, a PR rep for Google sat down with Imprint for a few minutes to talk about the new space. She mentioned that everyone who works there is involved in the local community and “works to get kids of all ages excited about coding.”

She told us that this was the first ever Doors Open for any Google office in Canada and that it was really exciting to have so many people there. Hunnings said, “The best way for [arts students] to get involved is to check out STEM initiatives run out of the office.” Hunnings also mentioned that this office is a place where science and technology can mix with arts to create a true STEAM environment. Hunnings concluded by saying, “The day has been amazing, we have had just under 2,000 visitors (as of 3 p.m.), a lot of people let us into their world so we’re happy to let them into ours.” Unfortunately, this new office does not have a slide like the last one did.

Our next stop was the St. Jacobs Railway Museum, at 50 Isabella St., St. Jacobs. Right in the heart of St. Jacobs, the name of this location is a little misleading. A small enclosed space housing a couple of offices and a train car with some information about trains and equipment—it’s not a museum in the traditional sense.

The last site of the day was the Perimeter Institute for Theoretical Physics, at 31 Caroline St. N, Waterloo. The building was interesting in its design and structure; it even won an Architecture Award in 2006. The tour guide very heavily stressed that the space was crafted to form the most collaborative work it could which was obvious from the chalkboards and open work spaces all over the building. The most interesting thing was that in the cafeteria, instead of having napkins on the table there were scraps of paper and golf pencils for any interesting collaborative conversations that might take place. 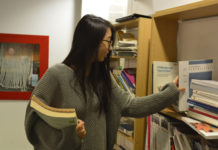