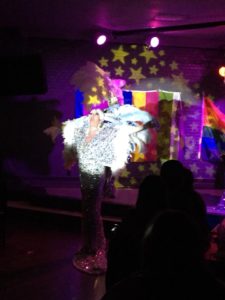 “Drag is for everybody, regardless of who you are, who society thinks you are, or who you want to be up on that stage. It brings people together.” Brie Treviranus, a graduate from Social Development Studies, said. They were so passionate about drag that they started the UW Drag Club to provide a platform for young drag artists in the community.

Drag me to the Bomber, a semesterly show, took place on Oct. 12th. The Glow Centre for Sexual and Gender Diversity hosted Drag me to the Bomber, which brings drag to the Bombshelter Pub and provides students with an opportunity to watch amazing performances by amazing artists from UW Drag Club members and local drag artists.

Lee Mousa, an English Major and President of the Drag Club described the importance of drag to the community.

Treviranus also emphasizes the confidence and community that drag builds for people that don’t want to conform to rigid societal norms.

“Gender identity is a really big thing for… pretty much all of us, like we have a lot of trans performers, and it’s important in that sense bc a lot of us just don’t want to conform to what people wants us to conform to and drag is really good for that bc you get to be whoever you want to be and it can be part of a performance and it’s a space where people might not judge you that hard,” Mousa added.

Having a Drag Club on campus provides students the opportunity to present themselves to their peers as they are.

“For us, it’s one of the biggest platforms, as a student club, run for students, by students, it’s a really big deal to have a show where a hundred something people show up, but it’s such a huge part of the campus community and these are our peers, these are the people we see, these are people who may come up to us in class and be like you were great!” Mousa said.

Treviranus also believes in the importance of creating an accepting environment on campus that may be lacking in the mainstream drag community.

“I think that it’s important to have on campus … to combat the stereotypes of drag, and the image that mainstream media creates of drags. It’s not always just men in dresses being trans-exclusionary, and being competitive and shady with each other,” they said.

The show involved performances by various artists. Drag artists danced and lip synched to sensuous music, walking into off the stage to interact with the audience.

They wore colourful, expressive clothing, much of which was removed during the performances. Finally, they ended with the announcement of their support of The Aids Committee of Cambridge, Kitchener, Waterloo, & Area.

Treviranus commented on their pride of the club and how far it has come since they started.

They said,“I love drag. I love how big the club has gotten, and how they’re using it to raise funds for charity. It’s so beautiful.”