So, a Waterloo student got a goose tattooed on his ass last week.

For those of you that don’t follow the University of Waterloo subreddit, a place which has progressively grown into a breeding ground of memes and shitposts, you missed a lot over the last month. A Waterloo student, “SseCn8jx,” offered to get an image of a goose permanently tattooed onto his ass if his post received over 2,000 upvotes. In what may be the most twisted expression of school spirit of all time, his post spread like wildfire, reached the top of reddit, and accumulated over 46,000 upvotes. On Jan. 6, SseCn8jx delivered, presenting his tattooed right buttcheek, now a monument to memes, to /r/uwaterloo. His two posts are currently the highest-rated posts on the UW subreddit by a massive margin, which shouldn’t come as a surprise to anyone who has spent any length of time on the Internet.

On one hand, it can be difficult to understand why he did it. He used a throwaway account, so clearly he wasn’t all that invested in getting karma (or maybe he just underestimated how much the Internet rallies towards silly causes). He took great efforts to hide his face, so he doesn’t seem all that interested in fame, even if he now has the most famous ass in UW history. The user claimed to be taking such drastic measures as a “nuclear shitpost that ends the meme war between /r/uwaterloo and /r/UofT,” which is a noble goal, but we were clearly going to win that anyway. So what truly drove him? Was he just looking for an excuse to get a goose inked onto his ass?

To me, SseCn8jx is a symbol of hope. Too often, the only common thread linking UW students is their hatred towards other UW students (or, at their most prideful, their hatred of Laurier students). SseCn8jx brought the people of UW (and the thousands of Internet passerbys that wanted to see a guy get a tattoo on his ass) together, and made them celebrate UW culture. Sure, he did it in a really strange, inaccessible way that he may come to regret in the many years he’ll have with his new, goose-branded ass, but he did it all the same. I have to admit, when I saw that he actually went through with it, I was genuinely impressed. The man oozes school spirit — in an in-progress photo, you can even see him wearing a Waterloo toque as he gets the tat — and to go to those lengths for your school is actually pretty amazing. Maybe if we all got goose tattoos, UW could become a school filled with spirit.

I sure as hell am not going for it, though. 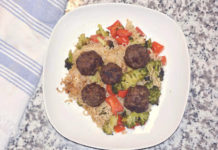 Braving the elements to bring awareness to homelessness