Each person watches anime differently. It could be waiting for a season to end, re-watching that one particular dub once in a while when you’re feeling down, or knowing the weekly simulcast schedule by heart. Sometimes it might be the daunting list of new shows that come out each season,  a midseason dip in animation quality, or just that sometimes being a fan seems to mean being weighed down by the consumerism aspect. I think with these few steps I’ve taken over the last while, being an anime fan has been a lot better.

Having moved from place to place for co-op, a large portion of the places I’ve lived in have had really bad Internet. Things like the Internet cutting out mid-way through the term, someone using up all bandwidth but no one wanting to confront them, or that time when a suitemate moved out with the router right before exams. Taking a break is perfectly valid: it’s not like the anime or games are anywhere physically and you can’t play them whenever you feel like it again. I usually give myself small windows to watch shows and generally don’t give into peer pressure, so I don’t feel the need to “catch up” all the time.

2) Evaluating where you are.

Some shows I really enjoy and identify with on the otaku level are WATAMOTE, No Matter How I Look at It, It’s You Guys Fault I’m Not Popular, and Genshiken: The Second Generation. All three of these deal with characters that have some difficulty socializing with “outsiders.” I know that if you’re a university student or working, you’re not a NEET (Not in Education, Employment, or Training), but sometimes I get stuck thinking about whether or not I’ll be like that, even as I laugh along. It’s good to take a step back and think about what you want to do. I tried to distract myself from a particularly bad term by playing games once, and thankfully someone noticed and gave me advice on how to get back on track.

Waiting a few weeks after the new season starts before starting anything; listening to podcast reviews, or just spending a few minutes looking into blogger reviews are just some of the ways I try to avoid content that will put me off anime. “Bad” is subjective, and different people have different preferences, but if you know ahead of time a show or game is just going to make you angry at the end, don’t watch it. Think of it as a way to avoid something like “Endless Eight” from happening again.

I think by drawing some fanart once in a while, going on Tumblr, watching PBS’ Idea Channel on Youtube, or reading some of my favourite anime blogs (ANN’s Answerman, Otaku Journalist, Moe Sucks, Manga Therapy, Gar Gar Stegosaurus, Organization Anti-Social Geniuses, Hinano’s Game Babbles, 4 Shiki, How a Girl Figures, Oguie Maniax, among others) are some of the other ways that I get involved in “being” a part of a fandom. There was a rather clever image set someone made on Tumblr that shows that an original source material equals a normal hamburger,  a movie equals a slightly smaller burger, and fanfiction/doujins equals a fully-loaded 30-stacker burger. The point is, there is more to fandom than just watching anime, and the fun part is anything that grows out of it, like working on a group cosplay with friends or writing that headcanon post that makes someone else’s day. Make stuff that makes you happy, as sappy as it seems.

Local startups drink to a good cause 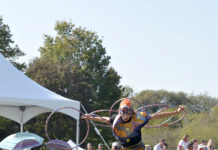 Bringing people together to Powwow