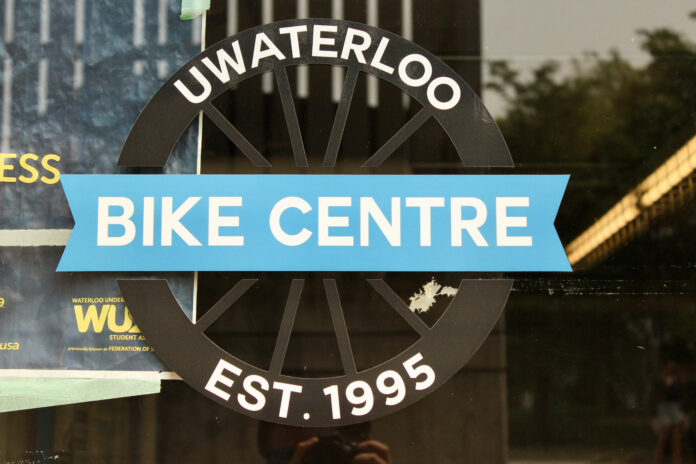 The University of Waterloo’s Bike Centre has been closed for over a month due to “unforeseen circumstances,” according to WUSA staff members and a sign on the centre’s front door. However, the centre was operating for a few short weeks at the beginning of the fall 2021 term, until all of its executive staff quit.

The centre initially closed due to the pandemic in March 2020, despite staff saying that it qualified as an essential service. It re-opened in spring 2020, however, former Bike Centre coordinator Harold Lee said there were staffing shortages due to the lack of people on campus, as well as strife between the centre’s volunteers and WUSA.

“Because of the pandemic, we could only have a limited number of people on the key list, which created a staffing issue from the previous year. People were genuinely uninterested because there was no longer much of a social aspect, with the possibility of interacting with other volunteers being diminished,” Lee said.

In spring 2021, the centre experienced two floods that Lee said turned the space into “a biohazard” — the room’s carpet had been soaked in rainwater and left to rot in the humidity. One of the centre’s former mechanics who asked to remain anonymous said the team was shocked when they were getting the centre ready for the fall term.

“All the keys for the rental bikes were mixed up. We had to clean the whole shop, cut up the carpet and throw it out. There were no spare parts in stock, no tubes, cables [or] fluids,” they said, adding that this was in part due to the negligence of certain staff.

In order to restore the centre before the start of the term, Lee said he recruited an experienced volunteer whom he described as his mentor and “basically the Bike Centre himself.” However, Lee said they were soon informed by WUSA that this individual was banned from the space without an explanation. Lee added that WUSA told them the ban was non-negotiable.

In response to Lee’s remarks, a spokesperson from WUSA told Imprint in an emailed response that: “WUSA is not able to comment on matters involving previous staff members but will note that we carefully consider the needs of our members, the quality of service we provide and the reputation of the association as a whole when making decisions about those who represent WUSA from a staffing perspective.”

This led to Lee resigning from his volunteer position at the beginning of the fall 2021 term, followed by his co-coordinator and five other executive volunteers. No executive staff were left to coordinate the remaining volunteers and WUSA shut down the centre on Sept. 17 — less than two weeks into the start of the term.

Tensions in tandem
Located in the basement of the Student Life Centre (SLC), the Bike Centre has been operating on campus since 1995. Though initially an independent establishment under UW, in 2015, the Bike Centre became part of WUSA and underwent several operational changes.

According to Lee, these changes resulted in conflict between WUSA and volunteers about the Bike Centre’s day-to-day operations and the nature of the centre itself. For instance, when the centre became part of WUSA, graduate students who wanted to volunteer were required to pay a fee to ensure they were covered under the association’s insurance.

Lee said a difference in mindset was one of the main factors leading up to the centre’s closure.

“They [WUSA] don’t view the Bike Centre as important like we do. Many of us have a specific, idealistic way of running the service, because we are experienced, and WUSA doesn’t appreciate that,” he said.

The former volunteer mechanic also mentioned that there was a lack of communication between WUSA and the volunteers.

“Every coordinator has said that WUSA never listened to any of the suggestions made in their termly reports. No matter what the coordinators wanted to do, they were almost always shut down,” they said.

“There was an extreme lack of transparency between WUSA and the executive team,” the former mechanic continued. “They didn’t communicate with us in terms of why things were happening; they would just do it. We were left in the dark on many things. They wouldn’t reach out to negotiate. They didn’t even contact us after we had quit.”

WUSA vice-president student life Catherine Dong acknowledged that there was conflict between WUSA and the Bike Centre, but explained that it was expected as is with any organization. However, she also mentioned that WUSA’s main goal since taking over the Bike Centre’s operations has been to improve the user experience for students and volunteers.

In response to critiques of WUSA’s management of the Bike Centre, Dong said they don’t make much sense.

The Bike Centre’s next ride
According to Dong, WUSA plans to re-open the Bike Centre in spring 2022, with preparations set to begin early next year.

“The only change is that we will be re-evaluating some of the internal operations and reviewing the layout to try to make it better for students,” Dong said. “We’re currently in contact with bike repair experts in the region to figure out the best way to offer an overall effective service.”

As WUSA looks to reopen the centre, the former mechanic offered some advice: “Keep the Bike Centre a service with student volunteers. Don’t use the Bike Centre to make money, and make sure the service to students is the top priority.”

Students that are interested in volunteering with the Bike Centre are asked to contact bikecentre@wusa.ca for more information. WUSA said it will also post regular updates regarding the Bike Centre on its social media pages.

Queerhellth: Taking down sexism and homophobia in healthcare