On Nov. 20 at the Peter Russell Rock Garden, the GLOW Centre hosted a vigil in honour of Trans Day of Remembrance.

Trans Day of Remembrance is observed every year to remember the lives of those taken as a result of transphobic violence and suicide. It is preceded by Trans Awareness Week — typically from Nov. 13 – 19 — which is meant to recognize the lives of transgender people around the world, and the complexities of trans identity.

On Nov. 28, 1998, at the age of 34, Rita Hester was murdered in her Boston apartment. She was a Black transgender woman. Police were unable to identify her killer, and the community was outraged by the onslaught of transphobic violence and suicide. To this day, her death remains a mystery. In 1999, the first Trans Day of Remembrance was held in San Francisco.

In the last 12 months, there have been 390 reported deaths of transgender people from around the world. Their names are listed on the site Remembering Our Dead — the youngest person was just 14 years old. The list cannot account for unreported deaths, and deaths that were not included because the identities of the deceased have been erased. Oftentimes transgender people are misidentified after death, and they are recognized under their deadname and gender assigned at birth; Rita Hester, for example, was first identified posthumously by police as a male under the placeholder name ‘John Doe.’ Media outlets, such as The Boston Globe, referred to Hester as a man who preferred to wear braids and women’s clothing, rather than identify her as a transgender woman. In cases like these, it is then up to those who knew the deceased to speak out and correct the error so their identity is not erased and their death is properly reported. A supportive community can mean the difference between being remembered and being forgotten.

At the vigil on campus, the theme was “Belonging.” Roughly two dozen people were in attendance, and candles were lit and held in memory. The vigil also recognized the shooting at the LGBTTQQIAAP+ nightclub, Club Q, in Colorado Springs, Colorado, on Nov. 19, which killed five and injured at least a dozen people.

Spencer Small, a counsellor at UW Counselling Services, provided support to students during the vigil and opened the speeches by stating the importance of the night.

“As a member of the community, this is such an important day, and recognizing what has happened last night in Colorado [the shooting in Colorado Springs] and what continues to happen around the globe to trans folks. I know tonight that it’s nice we can gather together to recognize those who have been lost and the strength and resilience of the community.”

Sam Faulkner, the trans equity director at GLOW, reflected on their frustrations around the lack of safety and support for transgender people in spaces that are often safe for cisgender people — including the University of Waterloo. “In Canada we’re supposed to be safe, and in Ontario we’re supposed to be safe, at the University of Waterloo we’re supposed to be safe. Unfortunately that’s not the case. I’ve been having a lot of conversations with people this week, over the last term, over the last couple of years really, talking about all the different areas that we face barriers. A lot of that comes to a lack of understanding, and not understanding the importance of why [Trans Awareness Week] is so needed.”

TK Pritchard, the executive director of the SHORE Centre, shared their personal experiences witnessing and engaging within the community.  “When I reflected on the theme tonight, which is community, I thought about how when I was 20, I didn’t know what that meant. I really struggled to picture what that could possibly look like. Fast forward five years, and I was a facilitator at OK2BeMe, and I think that was the first time I really saw what community could look like. I finally saw an example of what a room or a community could look like when we allow one another to just show up as we are, and accept that at face value.”

Faulkner echoed the importance of community and stated, “We’re able to build community in a lot of different ways — at the GLOW Centre, through youth groups, through engaging in activist work and reaching out to friends online. I think that belonging goes beyond a lack thereof — after experiencing harassment, I had a community there to support me, and what we should be focusing on is building that community.”

The names of the 390 deceased were read aloud, followed by a moment of silence.

Pritchard elaborated, “I would encourage you to not only think about who you are fighting for but to definitely fight for your spaces. Fight for trans spaces; fight for queer spaces. We know that the outside world is not always creating or allowing those spaces for us. Now, more than ever, they are vital.”

If you or a loved one is struggling, help is available. 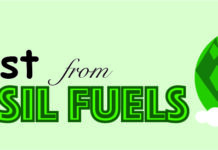 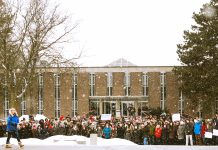 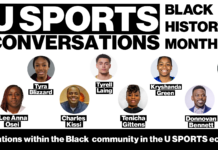