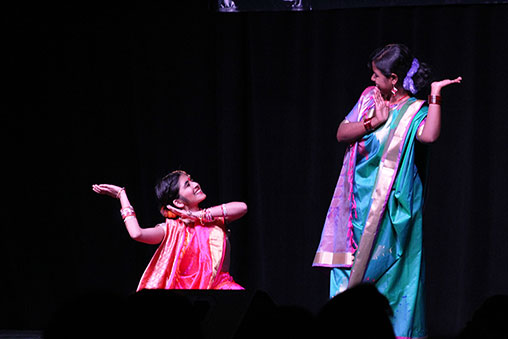 Dua Ahmed, 18, appreciates the wide variety of cultures that are represented by UW students.

As a Feds volunteer, she welcomed the opportunity to be a part of Cultural Caravan, where she had the chance to participate in an endeavour she enjoys.

“[Cultural events are important] to spread awareness about the different kind of cultures that are around us, especially in the uni where you have students from all around the world, so I guess, it just gives you a chance to learn about your peers’ cultures,” she said. Cultural Caravan is an annual event that celebrates the diversity of UW students and allows them to showcase their cultures in the form of dance.

This semester, it took place on Mar. 7 in the SLC Great Hall, and was attended by over 200 students, staff, and faculty.

Eight cultural student associations performed at the event, including the UW Bengali Student Association (UW BSA), which performed for the first time.

Fabiha Jahan Ahmad, an Honours Math student, was one of the two performers from the UW BSA. “UW has one of the largest percentage of international students, so I think it’s just a way to get to know each other. So I think it’s wonderful that we have this sort of cultural event just to get to know each other and promote diversity in UW,” Ahmad said. Daniel Nguyen, a third-year Honours Science student and member of the UW Vietnamese Student Association (UW VSA), was also a part of the group of students that performed a traditional Vietnamese dance.

He said that, although the Vietnamese population in UW is small, UW VSA wanted to represent their culture for the rest of the UW community.

“I feel very grateful, it’s awesome to share the stage with as many culture clubs here at UW. It’s interesting to see all the types of culture clubs UW has and it’s great to showcase that with Cultural Caravan.

It’s really nice, it shows that all the culture clubs here are equal, and it’s nice to showcase and show what being Vietnamese is all about,” Nguyen said.

For Clarissa Moreira, a salsa dancer and Recreation and Leisure student, Cultural Caravan brings diversity to the forefront and represents the multicultural nature of Canadian society.

“I think this is good because it really brings unity and diversity. No matter what background you are, you can just come and join a club and show your culture,” she said.

The show was live streamed for those who could not make it. Snacks were sold by the UW Association for Food Lovers Everywhere (uWAFFLE).

UWaterloo remains open as Wilfrid Laurier is placed under lockdown