Walking on Sunshine: UW releases list of faculty and staff with... 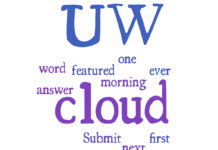