When Dr. Elizabeth Losh made the content for “Nasty Women and Digital Hygiene: Feminism and Purity Myths of Technoculture,” she thought she’d be talking about President-Elect Hillary Clinton.

After the results were released, Losh had two days to rewrite her Nov. 11 presentation on how ideas about technology and gender were used in terms of the latest U.S. election.

“I thought I would be studying her for the next four years,” she admitted during the talk in PAS.

Losh is the director of the culture, art and technology program and a scholar of media theory and digital rhetoric at the University of California, San Diego.

Dr. Beth Coleman, professor of experimental digital media at UW, organized the talk. “We organized this talk because we knew the outcome of the U.S. election would be dramatic. And it has been.”

“Losh has a long scholarly history talking about media and U.S. politics and configurations of gender, identity, and power. We thought she would be an ideal speaker for this moment.”

During the 2016 U.S. election campaign, Losh noticed patterns in the images of Clinton selected by Fox News. They show Clinton as a multitasker, “ignoring people or showing a negative affect [like a scowl or a frown],” Losh said, “accompanied by some of those photos on a slideshow behind her. They show Hillary unengaged with the world, eyes down and mouth unsmiling as she absorbs herself in writing an e-mail on her BlackBerry.”

Losh compared this portrayal to that of U.S. President Barack Obama. In his official White House-released photos, Obama isn’t shown absorbed in his phone and scowling. The phone, along with typing on a desktop, are relegated to moments outside of those captured in the photos. In one, a computer screen is shown in the foreground, abandoned, while the president throws a football behind it. In others, Obama is holding his phone, but not using it — he’s always shown engaged in the event and people around him.

“Those images of Obama using technology is curated.… Hillary didn’t have that kind of control,” Losh said. The White House could choose exactly what images of Obama to release, while Clinton couldn’t vet every photo taken on the campaign trial.

Losh also connected these portrayals to embedded cultural ideas of feminine vs. masculine work. She quoted J.C.R. Licklider, a psychologist and computer scientist from the mid-20th century who foresaw many of today’s technologies: “One can hardly take a military commander or a corporate president away from his work to teach him to type.”

Losh said that Hillary, who didn’t even know how to use a desktop computer when she became Secretary of State in 2009, “was trying to be the commander instead of that traditional feminine service role” in her rejection of learning typing and IT skills. Despite this, she has been inextricably tied to technology through the e-mail scandal, while Obama’s image is carefully cultivated to show him around, but not using, computers.

For Losh, gender and using technology is inextricably linked. Though we won’t see a President Clinton anytime soon, Losh will continue her research.

As for seeing more talks like this one, Coleman said that Losh’s talk was not part of a series at UW, “but the response was very enthusiastic. We are discussing making it one.” 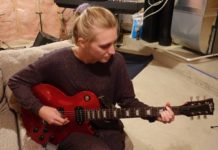