In support of the Land Back Movement, the Waterloo community came together to build a tiny house to help the Indigenous community protect their land. Imprint spoke with Adrian Blackwell, an Associate Professor in the Architecture faculty at UW, as well as Rob Reid, a UW Engineering Alumni for more information on the project.

“The Land Back Camps that have existed since summer in Caledonia and in Kitchener-Waterloo, those struggles are ongoing and have been ongoing for a long time before and the university has done very little to acknowledge its place in this territory…I see it’s kind of one part of a larger conversation, but maybe the most immediate. I think some of us felt glad to be able to do something tangible in the short term,” Blackwell said.

On Tuesday, Jan. 12, 2021, a small house was built on 1492 Land Back Lane, also known as the Haldimand tract – which spans six miles on either side of the Grand River and is where UW resides. In response to the ‘Caledonia Land dispute,’ an ongoing legal battle between the Six Nations of the Grand River and the Government of Canada followed, in which the land given to the Six Nations was sold and continues to be stolen by various Canadian governments. In order to protect these lands, protesters also referred to as “Land Defenders,” came together and refused to leave the site in order to protect their land.

“In the summer, in response to construction starting on that land, the community i and reoccupied the site and they stayed intense which was fine for a while… All the topsoil is gone, it’s just a slink wasteland of clay. So anytime there’s any wind or rain, all the tents would be blowing over and sitting in puddles. With the winter, they needed more permanent solutions to be able to stay on the site… so the only real way to have a voice is to stay there as long as possible. What we’re doing with the house is to give them a place to stay on the line and occupy it and assert their rights to that land,” Reid said.

Furthermore, both Rob and Adrian talked about how there needs to be more action from the university, as well as pushing to have these hard conversations in order to initiate real change.

“One of many institutions they can contribute to as a solution that recognizes Indigenous sovereignty and really comes to terms with the fact that we’re still profiting from this stolen land and that the university is still profiting from this stolen land, and it’s not enough just to say we know we’re stealing it – we’re invited guests who are taking resources and limiting Indegenous people’s livelihoods,” Reid said.

They also provided insight on some initiatives that support Indigenous peoples such as working alongside the Faculty Association at the University of Waterloo (FAUW) to structure the university around free admission for people from the Six Nations to UW and other universities on the Haldimand tract. The two also provide resources for others to support the Land Back movement and get involved such as following the 1492 Land Back Lane social media accounts, volunteering, and donations.

“I want to say that what we’re doing is a very small niche… and so we don’t want to distract the conversation from the voices of people who are trying to be heard, which is the people trying to get their rights recognized,” Reid said.

The Land Back Camp is a movement to protest against the improper fees that are charged against Indigenous people for gathering and residing on their traditional lands. The Indeginous community has been gathering on the land, now Victoria Park and Kitchener, for over a hundred years. 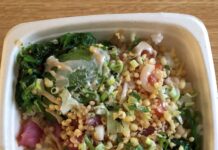