“The [Post-Secondary Industry Partnership and Co-operative Placement Initiative] will support partnerships between employers and willing post-secondary educational institutions to better align what is taught with the needs of employers,” the 2016 budget read.

“The initiative will also support new co-op placements and work-integrated learning opportunities … with a focus on high-demand fields, such as science, technology, engineering, mathematics, and business.”

Feds VP education Stephane Hamade said he was “proud to have been the first student group to have advocated for this,” in a post made on his personal Facebook timeline and said that more co-op opportunities would be available for UW students as a result of this initiative.

“We expect to see an increase in the number of co-op positions, through incentives made to industry employers. Many employers have stated that lack of funds is a barrier to hiring/paying co-op students; we hope that this [federal funding] will begin to address this issue,” Hamade said in an interview with Imprint.

The Co-operative Education and Career Action Centre operates UW’s co-op program. Currently, there are 19,000 co-op students enrolled in over 120 programs at UW with a co-op student employment rate of 97 per cent according to their website. 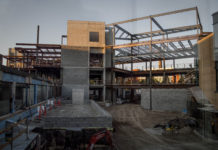