Although patented in 1993, fidget spinners became largely popular in 2017. Created with ball bearings placed in the middle of various styles of plastic, metal, and glass bodies, the toy was largely unknown until December 2016.

Marketed for people who have difficulties focusing, the manufacturers claim that they help with concentration issues.

The scientific community however, remains divided. Controversial debate started with the smaller parts of spinners creating a choking hazard for kids. Several schools banned fidget spinners on the basis that they proved to be an active agent of distraction, and some scientists argue that they actually intensify distraction, especially for people with attention deficits who have hard a time concentrating on task.

Mark Rapport, a clinical psychologist at the University of Central Florida who has studied the benefits of movement on attention, said that “using a spinner-like gadget is more likely to serve as a distraction than a benefit for individuals with ADHD. Without studies that specifically look at fidget spinners, it’s impossible to say for sure whether the devices could help kids with ADHD.”

While the sensory exercises prove to be beneficial for kids with autism, the lack of movement in large segments of the user’s body renders the benefits to a minimum, and likely results in the item being nothing more than a toy.

Scientists are planning to continue their experiments on learning the complete effects of fidget spinners, and attempting to locate its incorporation as a tool for development. However, for larger audiences outside of the medical community, this item will likely remain as a fad.

Imprint asked UW students what they thought about fidget spinners:

“What can I say? They feel like less science-y gyroscopes” — Jordan Snyder.

“I don’t own any. They kinda remind me of yo-yo’s. Don’t see many around nowadays” — Leyli Mammedzada.

“Ummm, I think they are ok. I don’t know why they are so hated. They seem pretty innocuous to me” — Dale Putnam.

“It’s good that they’re becoming more widely accepted, because apparently neurodivergent people find them really valuable. And anything that helps promote acceptance of neurodiversity is cool in my book” — Heather Stonehouse.

Here at UW, Feds started selling fidget spinners at SLC’s International News for $4.99 +tax, and the sales have been going well, finishing the first batch of spinners.

When it comes to the fads, one of the greatest examples is Heinz Green Ketchup, something that became famous in early 2000s. Will the fidget spinners become the signature fad of the decade? Only time may tell. 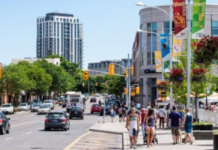 COVID-19 Confusion in Waterloo Region – Making Sense of it All