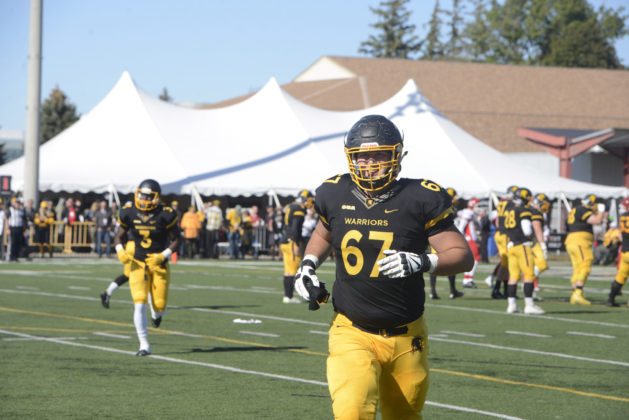 Head Coach Chris Bertoia’s pleas to his team fell on deaf ears as he watched the Warriors commit 17 penalties for 127 yards, costing them a win against the Guelph Gryphons.

Special teams was a mess all game for the Warriors, with multiple kickoffs bobbled, resulting in poor field position that led to the Warriors conceding a safety on their opening possession.
Guelph made it 5-0 before Waterloo put a first down on the board.

A fumbled punt by the Gryphons gifted the Warriors life, with Dion Pellerin running in from one yard out to give the Waterloo a 7-5 lead.

The lead didn’t last long, with the special teams fiasco continuing for the Warriors. The ensuing kickoff was returned 96 yards for a major by Jason Richards, stealing back the lead for the Gryphons, 12-7.

Another floundered kick return left the Warriors pinned deep in their own territory on their next drive, but bad field position didn’t stop the Waterloo offense.

On second and seven from the 15- yard line, quarterback Lucas McConnell stepped up in the pocket and found Tyler Ternowski deep down the middle of the field for a 95 yard touchdown, giving the Warriors a 14-12 lead.

Waterloo would hold the lead until the final minute of the game.
The second quarter was all Waterloo, with the Warriors outscoring the Gryphons 15-0, to take a 29-12 lead into halftime.

Waterloo tacked on a field goal on their first drive of the second half, before Guelph started their comeback. An end-zone pass interference penalty gave the Gryphons first and goal from the Waterloo one-yard line, and Johnny Augustine plunged in to cut the Warriors’ lead to 13.

Before the Warriors’ offense could get their hands back on the ball, the Gryphons executed a perfect onside kick, and two plays later, Augustine had his second major of the game, this time from three yards out, bringing Guelph within one score.
Waterloo responded with a touchdown of their own, and saw quarterback Tre Ford taking the ball himself from 15 yards out, restoring the 13 point lead heading to the fourth quarter.
The Warriors’ defense couldn’t keep points off the board in the fourth quarter, with the Gryphons going touchdown, touchdown, field goal, and field goal to open the quarter.

Ford’s second rushing touchdown of the day stopped the Gryphons from snatching the lead, but the second field goal left the game tied at 46.
With 2:09 remaining, Guelph fumbled a punt.

Warriors couldn’t muster much offense, but a 42-yard field goal by Caleb Girard gave Waterloo a 49-46 lead with 76 seconds left.
Guelph opted to make Waterloo kickoff into the wind, rather than taking the ball on the 35-yard line.
Waterloo’s indiscipline shone through on the kickoff. The Warriors tackled the Gryphon kick returner inside the Guelph 10, but a questionable offside call on Waterloo forced a re-kick from five yards further back.

On the re-kick, Guelph returned the ball to their own 50-yard line, but the Warriors final penalty of the day was a back-breaker, a 15 yard unnecessary roughness penalty, giving the Gryphons possession inside Warriors’ territory.

Guelph marched the ball down the field and Augustine finished off his hat-trick with a 22-yard scamper to give the Gryphons the 53-49 victory.

The Warriors have given up 231 points on the season, second-last to Windsor’s OUA-worst 306 points against. After squandering their opportunity, they’ll look towards next week to try to wrap up their berth.

Waterloo take on the Queen’s Gaels Oct. 5 in a pre- Thanksgiving tilt. Kickoff is 6:30p.m. 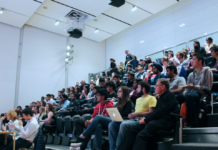 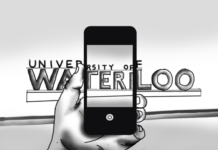