However, according to a BBC News article, 130,000 women were registered to vote compared to 1.35 million men. Women are still unable to marry, attend university, or travel abroad without male permission, according to an article in the Wall Street Journal. Undoubtedly, there is still a long way to go for equality in Saudi Arabia.

Nevertheless, an increasing amount of Saudi women are obtaining undergraduate degrees, many from Western universities. Bessma Momani, an associate professor in the political science department at the University of Waterloo, said that, “A western university degree really has a lot of positive market value. It says a great deal about a women’s ability to take a degree or to finish a degree in a very competitive environment.”

In an article in The Globe and Mail, Momani wrote that almost 90,000 Saudi students are admitted into the United States and 20,000 into Canada. This is funded through the Saudi government’s King Abdullah Scholarship program.

“[A university degree] help[s] [Saudi women] in getting a job in the workplace….It’s a positive credentialing…. Many of the women who are [in North America] do often have to be more independent than they would in Saudi Arabia, so they do learn new skills being independent, living in a western society, and that obviously helps and shapes her confidence levels in a positive sense, [that] I think [can have] a very positive effect on their society and in society,” Momani said.

With more and more people getting undergraduate education in Saudi Arabia, there is more and more potential for the women’s suffrage movement to continue.

“A lot of change is coming to Saudi Arabia,” Momani said. “The increase in education of young people in the Saudi Kingdom … is something that I see as a positive point in changing the Kingdom from within.” 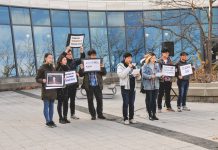