For their first game Jan. 8, the team travelled to the Toronto looking to sweep the season series against a Ryerson Rams team who the Warriors defeated earlier in the season in Waterloo.

The Warriors had the first power play of the game early in the first period, but were unable to capitalize on the extra man advantage. The Rams on the other hand did, when Michael Fine got Ryerson on the scoreboard five minutes into the game with a power play goal, giving the Rams a 1-0 lead.

During the second period, the Warriors were looking to tie the game, but also played a strong defensive period in order to avoid the Rams from adding to their lead. It wasn’t until the 3:11 mark when Cam Nicoll tied the game at 1-1.

The third period saw both teams come out of the locker rooms determined to win the game. A Warrior penalty at the 7:20 mark gave the Rams a chance to add to their lead, but Waterloo was able to fend them off. Unfortunately, as soon as the power play concluded, Mitch Gallant gave Ryerson a 2-1 lead by netting in a rebound.

The lead was short lived as 22 seconds after Gallant’s goal, JoeyChampigny snapped a sweet wrister past Ryerson goaltender Taylor Dupuis, tying the game up at two apiece. With just over three minutes left and the game looking like it was going to overtime, team-leading scorer, Colin Behenna scored the game-winning goal off an assist by Champigny and Andrew Smith.

The final score being 3-2 in favor of the Warriors.

The next day, the team was back in Waterloo to face off against the tough Guelph Gryphons who at the time were above the Warriors in the OUA west standings.

In the first period, Behenna put himself back in the scoring column with a power play goal with an assist from Mike Moffat. 1-0 Warriors.

The Gryphons were able to tie it up in the second frame with an unassisted goal by Dylan Gilbert off a costly turnover by Moffat in Waterloo’s zone. Things got rough in the second period as eight penalties were handed out.

Despite the physicality, the Warriors were able to regain their composure as Smith, was able to give the Warriors the lead with a goal assisted by Daniel Perigo.

With three minutes left in the game, Riley Sonnenburg shut the gates for good with a wrist shot from the right wing that got past Guelph goaltender Andrew D’Agostini, giving the Warriors a 3-1 lead which ended up as the final score.

With these two wins, the Warriors extended their winning streak to six games and vaulted them up in the OUA West standings.

Waterloo goaltender, Mike Morrison, was outstanding with 30 saves against Ryerson and 24 against Guelph, while only allowing a combined three goals between the two contests.

The team currently sits in fifth place with 20 points for the season but are only two points behind the second, third, and fourth place teams — Windsor, Western, and Guelph, respectively — who each have 22 points.

The Warriors will look to extend their win streak as they host Laurentian and Nipissing next weekend. 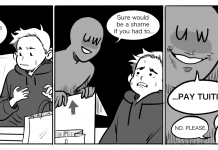 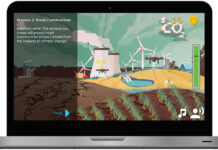 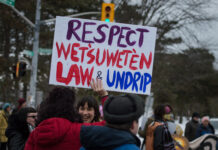