My Icarus tattoo was created by Lucille Sims at Mom’s Tattoo Shop in Waterloo. It was done in October 2020 — my first year of uni, just one month after moving away. I have always loved tattoos, and getting one not only felt like an ‘adult’ thing to do, but I knew it would become a unique and authentic part of my identity. I had no idea how healing it would become.

The story of Icarus comes from Ovid’s Metamorphoses — a beautiful and famous piece of Latin poetry. Icarus’s father, Daedalus, was a renowned Greek inventor, and both of them were trapped at the top of a tower. Daedalus used bird feathers and candle wax to create wings that would enable him and his son to leap from the tower, fly away and escape. It was a success, and Daedalus and Icarus soared. Daedalus called out to Icarus not to fly too close to the sea; otherwise, his wings might touch the water, and he’d crash. Famously, he also warned Icarus not to fly too close to the sun, or the heat would melt the wax, and Icarus would fall. However, Icarus — enamoured by the divine feeling of flight and liberation — flew higher and higher, breaking through the clouds. The sun melted the wax, and Icarus plummeted to the sea below and drowned.

Icarus, to me, is a metaphor for love and relationships. I got this tattoo when I was recovering from a toxic relationship. Like Icarus, I flew too close to the sun — I gave too much of myself, overjoyed by the feeling of being seen, but in the end, I was burnt by manipulative, inauthentic love, and I crashed. I nearly drowned during my recovery. I thought I would never be able to swim to shore.

This tattoo felt like a love letter to me. It is a reminder to set boundaries and find a balance in my relationships — not to hide and give too little, fly too close to the sea or give myself away for the sake of whoever is the metaphorical ‘light of my life.’ It reminds me to listen to my gut and the people in my life who care about me, but above all, it reminds me to respect myself.

I love music and also have a soft, personal connection to the god Apollo. My lyre tattoo is yet another nod to Greek mythology, and it ties together all of the famous Greek figures I love — Apollo, Achilles and Orpheus. It was done by Sean Martin at Perfect Image Tattoo in Waterloo in October 2021.

Both tattoos are on my arms, which have been a source of insecurity for me. I’ve always worried that my arms are too big and ugly, but getting tattoos here has forced me (in a beautiful way!) to shed some of that insecurity. I worry less about people looking at me and judging me — instead, they see the beautiful art on my body. 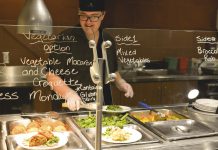 Meatless Mondays anything but mundane