Spooky season is in full swing, and if you’re like the editorial staff at Imprint, you regularly make playlists based on your mood, the time of year, or just because. Halloween is no exception. That’s why we’ve curated the perfect playlist for you ghouligans that’s sure to put some pep in your zombie-like step.

Not very Halloween-themed but definitely a staple to every party! A classic upbeat song that everyone can recognize just from hearing the first few seconds, it is perfect to bring everyone to the dance floor. After all, no one can resist singing along to this ‘03 masterpiece! – Felicia Daryonoputri, Assistant Science Editor

2. “Scissorhands” by Maggie Lindemann
This angsty pop-rock song from Maggie Lindemann’s PARANOIA album was inspired by Tim Burton’s 1990 film Edward Scissorhands and will put you in a Halloween mood. The haunting melody and sharp scissor sound effects will give you chills while the drums and guitar riff will make your heart race. – Jia Chen, Creative Director

3. “Zombie” by The Cranberries

A 1994 classic, “Zombie” is a protest song that has long been long recognized as “a masterpiece of alternative rock” by critics. Written in memory of the two young victims who were killed in the 1993 Warrington bombings, the energy, heavy drums and humane lyrics make it a song for the ages. There’s no way you can forget it once you listen to it, the chill never leaving your spine. – Sharanya Karkera, Head Designer

4. “Haunted – Live/2011” by Taylor Swift
Nothing is as scary as seeing love fade away right before your eyes. This alternative rock song is a lyrical masterpiece, with a euphonic orchestral melody. Moreover, its dramatic opening of string instruments makes for a truly haunting listening experience. As amazing as the studio version of this song is, this version from the 2011 Speak Now World Tour is chilling. – Abhiraj Lamba, Arts & Life Editor

This haunting melody is about Rhiannon, an old Welsh witch and goddess of the moon. As one of The Rolling Stones’ 500 Greatest Songs of All Time, it’s a must-hear piece with incredible vocals. Stevie Nicks would often perform the song dressed in all-black witchy attire. – Rebecca Butler, News Editor

A recent EDM track by Canadian DJ Rezz with lyrics sung by Dove Cameron giving off strong vampire vibes. The track starts off with an uneasy feeling but builds towards a drop that makes any partygoer want to headbang like they’re at EverAfter. – Andrew Yang, Video Editor

7. “Calling All The Monsters” by China Anne McClain

Thinking back to your childhood can be frightening enough, but Disney’s spooky classic gave us quite a few chills when we were kids. This electropop hit had us all dancing along with the freaky monsters on our TV screens (OK — it was probably scarier when we were kids). If anything, this reminiscing beat will have you and your friends jamming on Halloween night. – Lauren Wolfe, Intern

8. “Werewolves of London” by Warren Zevon

Ah- hoo…This 1978 rock song has all the spooky vibes you need for this Halloween. Whether you’re walking to class on a crisp fall day or blasting music on a speaker, you’ll want to make sure this bop is in your playlist. – Hayley Austin, Science & Tech Editor

9. “Any Kind of Dead Person” by Brittain Ashford and the cast of Ghost Quartet

While the entire musical is perfect for giving off creepy, gothic vibes, this bouncy patter song is the most self-contained song on the album. Its lyrical list of different kinds of dead people is the perfect mix of whimsical and macabre to sing along to at Halloween.  – Erin Froud, Assistant Arts and Life Editor

10. “Hallowed Be Thy Name” by Iron Maiden
One of Iron Maiden’s heavy metal classics from the album, The Number of the Beast, this song is a first-person account of a man who is sentenced to death and is awaiting an appointment with the executioner, at which time he will be hanged. During the song, he describes the setting of the prison and his reflections on his past life. He is able to find comfort in faith, or religion, or God — but the universally applicable message is that anyone can find comfort in something, even in the direst of circumstances. – Rohit Kaushik, Opinions Editor

The closing track to one of thrash metal’s most iconic albums, and inspired by the writings of H.P. Lovecraft, this is a purely atmospheric piece that truly captures the feeling of awakening an Eldritch god from a thousand-year slumber deep beneath the sea.
– Eduardo Matzumiya, Head Copy Editor

A classic Halloween track that has spooky vibes from start to finish! This song can get everyone up and doing the iconic dance that was portrayed in the music video.

An upbeat Halloween song from 1962 that follows a mad scientist whose monster rises from his lab to perform a popular dance of the early 1960s, the Mashed Potato. Eerie sounds of coffins opening and a cauldron bubbling can be heard throughout the song and will for sure put you in the Halloween mood. – Nicole Howes, Assistant News Editor

14. “The Monster” by Eminem and Rihanna

Ooh-ooh-ooh-ooh! Put down your candy corn and move to the mic because this 2000s throwback is too good to skip. With an abandoned house as the album artwork and a mix of haunting riffs, everything about this song screams spooky season! – Heather Ecobichon, Assistant Head Designer

This haunting tune tells the story of John Brown, a gold-seeking miner whose ghost watches over the beach by which he was buried. With a haunting whistle and chilling lyrics, “John Brown’s Beach” is the perfect folky addition to any fall playlist.

This alternative/song released in the 2016 album called Living with Ghosts is aptly spooky for this Halloween season. Written from the perspective of a soldier off to war, My Chemical Romance sings about death and hell. This song is upbeat and dark at the same time. Its catchy beats will have you bobbing your head and singing along to some very dark lyrics. –Ramal Rana, Sports & Health Editor

Think seduction meets spell casting meets eerie keyboard — that’s exactly what this song is. The slow, soothing sound of Lennox’s voice overtop of the piano can put anyone in the late-night Halloween mood; the hype of the party is over, now it’s just you and your special someone (or you and an after-party self-care session — we won’t judge). – Alexandra Holyk, Executive Editor 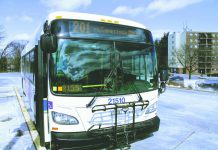