Universities have long been hubs for activism and advocacy, providing students with the support needed to get social movements off the ground and raise awareness for causes they believe in.

In Canada, one of the more famous examples of student activism occurred at McGill University in 1968. During this time, abortion was a crime, and the distribution, sale, and advertisement of contraception were illegal under Canada’s Criminal Code. Information on sexual health was scarce, so McGill undergraduate students Allen Feingold and Donna Cheniak penned and distributed The Birth Control Handbook. The handbook provided information on reproductive organs, contraception, menstruation, abortion and safe sex. Though it was illegal at the time of its first printing, millions of copies were distributed between 1968 and 2000. It was a groundbreaking text for reproductive health and a testament to the potential of student activism.

At the University of Waterloo, similar movements occurred with the rise of student activism in the 1960s, and many of the issues remain relevant today. On Oct. 17, Special Collections and Archives (SCA) at Dana Porter Library presented an exhibit titled Democracy in the Classroom Provides No Social Change: Activism at Waterloo. The exhibit brings together evidence and mementos from student protests and demonstrations dating back to the 60s and includes newspaper clippings, posters, and photographs.

Jessica Blackwell, librarian for the SCA, explained the purpose and importance of the exhibit.

“We wanted to showcase activism and protest movements. There’s a combination of both on-campus activism — so, things like the housing crisis, which we still see today with students, issues with tuition and textbooks costs. There are also some activities that were going on broadly in the world, social justice movements and protests and other activism that students were also involved in. We have everything from Apartheid to more current issues like global climate change and Indigenous rights in Canada.”

The collection bears witness to the university’s ongoing concerns around gender-based sexual violence, with a poster made by the former UW group Males Against Sexual Violence. The collection represents the fight by student workers to be compensated fairly by showing historical and current campaign handouts by OrganizeUW. There is a poster from a protest against the Beijing Massacre of 1989 and an issue of Imprint from 1992 with the headline “Walkin’-A-Breast,” about a protest on campus in support of a woman’s right to be topless in public legally.

The exhibit invites people to question what has changed and what hasn’t. “I think there are a lot of things that make people go, ‘Oh, we’re still talking about this.’ I’ve had people come up to me and say, ‘It’s amazing this is historical — is this stuff we still talk about today?’ Like the sexual violence — the [exhibit] over there, people were saying, ‘When was that? Oh, this was in the 90s,’” Blackwell said.

Although many of these issues are still at the forefront of student life, universities remain an ideal environment for organization and mobilization because of their position as educational institutions.

Universities are institutions of knowledge, power, and influence, especially in a city like Waterloo. The city is home to approximately 50,000 students from both UW and Laurier, and they are a considerable part of what makes universities influential and unique. The exhibit hosted by SCA shows that UW students are not afraid to raise their voices and put this influence toward a cause.

There is strength in numbers. The collection is a testament to the fact that if there is a social or political cause worth fighting for, university students will be there on the corner with signs and chants advocating for change; they will occupy admin offices, the paths that weave through campus, or hubs such as SLC. 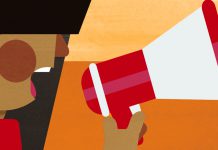 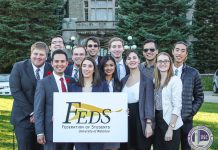 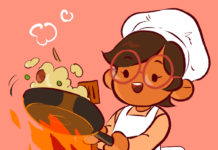