Q: How did you prep for the tournament?

There isn’t a specific prep for the OUA Championships. We start training in September with the goal of being ready for the end of year championship meets. We did take some of our top athletes to Cornell in the U.S. the weekend before to get some last-minute ranking improvements … This meet paid off as we had some large personal bests there and they came away from that much more confident. Otherwise, not too much.… [We] just made sure everyone was fresh and confident.

Q: How did you feel going into the tournament?

Confident with the year’s training and progression of the athletes. We knew our athletes were ready, and it was just a matter of competing well.

Q: How did you feel as the tournament continued, considering the number of personal bests that were being accomplished?
Very pleased. As the meet went, on there were highs and lows, as is expected. Our highs greatly outnumbered our lows. Many of the athletes were on the verge of getting to the next level … which is a great result for a young group and will help them stay focused to meet that goal next year.
Q: How did you feel about the results; with women placing seventh out of 14 and men eighth out of 13?
Very happy. The top teams have budgets [much] larger than ours, in addition to state-of-the-art tracks/training facilities, and many full-time paid coaches. Being up in the mix at all is a testament to our coaching staff and athletes toughness and unwillingness to accept excuses. Being in front of all of the teams with situations similar to ours and in front of others of better means is great and our main goal.
Q: Who was your MVP of the tournament?

Undoubtedly, Naomi Lance.  She had the highest individual placing (fourth in a super deep field) and was the fastest in the two relays she ran. She was a part of the 11 points out of the 14 points we won. She is currently ranked fourth in CIS and will be fighting for a medal again at the CIS championships next weekend.

Q: What do you think can be done to improve performance?

We are a very young team and had a lot of athletes lost due to unrelated injuries and co-op (especially on the men’s side), so we expect that with normal progression, to be significantly better. We also are continually working on new recruits and expect to have some great additions next year.… Ultimately to compete with the top five schools, we would need at minimum some facilities to be able to train in all of the events.… Next year, I do expect both men’s and women’s teams to be above 20 points each.

Q: What are your plans for the future?

Naomi Lance in the 300-metre and the women’s 4×200-metre team, consisting of Kelsi Darmon, Naomi Lance, Jenny Carrique, Tegan Sauer, and Rachel Bronzovich, have qualified for the CIS championships next weekend in Windsor, so that is our immediate focus. 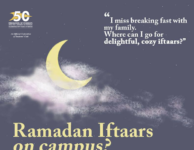