I don’t think there’s any quippy or clever way to introduce this topic aside from just saying it:

For a brief period as a child, I thought I was the reincarnation of Jesus Christ.

Now, who hasn’t as a child considered themselves King of the World or Emperor of the Universe? It’s completely normal for children to make-believe.

But I wasn’t make-believing. I actually, genuinely, seriously, really thought that I was the flesh and blood reincarnation of the son of God.

I don’t know if this is normal or not.

My fourth grade teacher told us during religion class that Jesus is bound to return, and that he would be reincarnated on Earth and live among us again.

Jesus could be any small boy in any normal family.

Jesus could be anyone.

I never considered myself a particularly impressionable child, but a psychologist might have considered this line of thinking a “red flag.”

I didn’t tell anyone. They wouldn’t understand. Besides, I had now evolved beyond my mortal ties. Everyone else were sheep and I was the shepherd.

I started reading some passages from the Bible because I figured it would be a good idea to have at least a general understanding of it.

I started forgiving people of sins and asking for forgiveness myself so I could be more like Jesus. (My brothers were met with casual requests of peace and love followed by brief psalmic interludes.)

I started wearing sandals to school.

My hair and attire became more Jesus-esque. I couldn’t be concerned with such trivial matters any more. I had a universe to save, or whatever it was Jesus did.

I didn’t really know the full extent of His abilities because I was really more of just a casual fan, but similar to the period of time after first watching Star Wars, I did attempt some levitations.

I prayed more often, but it was really more of a casual thing. (For example, “Hey dad, what’s up? Just found out I’m your son.”).

Speaking of which, I began to regard my human father with a tinge of apathetic disinterest and scorn, which apparently survived divine epiphany and matriculated into my teenage years.

I remember the realization that I was in fact Christ reincarnated being so powerful and overwhelming, which is why it’s very surprising this phase only lasted about a week.

I suppose I eventually just got bored of the Bible-reading, the daily prayers, and the sandal wearing.

Well, actually, I didn’t get tired of the last part. I still do that.

And I will find myself attempting to turn water into wine on occasion, but who doesn’t?

If you’ve never thought you were Jesus, you should try it, as it’s very illuminating.

I also found myself filled with a sense of duty, purpose, importance, and responsibility at a very young age. Had I continued believing I was Jesus, I would most likely be a much more strong-willed, focused, and driven person today.

(As a footnote, I would like to point out that my theory has technically never been disproven, so if anyone would like to regard me as the messiah, I would not be diametrically opposed.)

Peace and love, your Lord and Savior.

Things to know before voting on the SLC/PAC extension 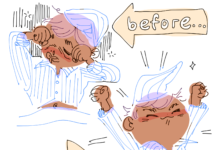