Heading into the Ontario University Athletics (OUA) Championships, the Warrior Figure Skating team was optimistic that their hard work throughout the season would pay off.

Within the short two-weeks  between their two major competitions, the Warriors trained nearly every day, to prepare for their last competition of the season. On Feb. 12 and Feb. 13, Queen’s University hosted the annual OUA Figure Skating Championships at the Invista Centre in Kingston, Ontario. In attendance were nine teams from OUA universities. At the competition, each team, sent one to four skaters to compete in each of the 14 different events over the course of two days. Depending on the placement of the skater(s) in each event, they earned points for their team.

On day one of the competition, UW student, Darshak Patel competed in the Men’s Freeskate event, placing fifth, which earned one point for the Waterloo Warriors. Emily Champion and Chloe Valcin-Wright also scored two points with their 5th-place finish in the Star 8/9 Similar Dance event where they beautifully performed the Harris Tango and Blues pattern dances. Both the Western Mustangs and the Toronto Varsity Blues reached the podium on each of the eight events of the day, placing them first and second respectively with 62 and 56 points. The McMaster Marauders were third with 36 points.

On day two, Jocelyn Wong competed in the Women’s Gold Freeskate event, skating a beautiful solo to Josh Groban’s “You Raise Me Up,” placing third, and earning five points for the Warriors. The competition ended with the Synchronized Skating event. The Warriors had been training hard over the past several months for this event while suffering many setbacks, but in the end, managed to pull off a strong and entertaining skate to Queen’s “Bohemian Rhapsody.”

Going into the Synchronized Skating event, the Blues were ahead of the Mustangs by a mere four points. The Mustangs had been undefeated in this event since the 2018 OUA Championships, and winning again would break the Varsity Blues’ 3-year OUA Championship winning streak. However, the Mustangs suffered an unfortunate fall during their synchronized skating program, giving up the win to the Varsity Blues who closed the competition with a clean skate.

The Toronto Varsity Blues achieved their fourth consecutive OUA Championship title with 100 points overall. The Western Mustangs placed second with 91 points and the McMaster Marauders pulled out a solid third-place finish with 45 points. 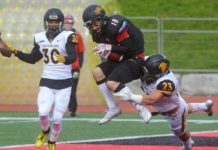