Students may be missing UW’s campus right now, but construction teams have been hard at work in the absence completing a brand new upgrade that’s ready for students’ return.

The PAC gym floor, which had been in place for over half a century, was replaced with a new high performance floor called the Robbins Sports Surfaces MVP Floor. The floor, installed by Gym-Con, focuses on optimizing biomechanical interaction between athlete and floor by minimizing vibration and maximizing uniformity, while maintaining proper energy return.

The main court has also been renamed after the late and founding member of UW, Carl Totzke. It is a fitting tribute to Totzke’s vision that he established in 1957, which emphasized fun and hard work.

Totzke’s family is honoured at the university’s recognition of his life and work.

“Our entire family is so honoured that the university is recognizing him by naming the main PAC court after him. This is a place he spent many hours cheering on the Warriors, and he would be elated that his name will forever be a part of the Warriors rich history,” Totzke’s daughter, Sue Cousineau, said.

Adding to his place as a founding member, Totzke instilled spirit for the university, eventually taking on the role of UW Athletic Director in 1957. Given the fact that the department had not yet been formed, Totzke had the task of building the department from scratch, which he did with passion over the next 33 years until his retirement.

“Carl was a true pioneer of our institution and of intercollegiate sport in Canada,” said Roly Webster, director of Athletics and Recreation. “Carl built a foundation and philosophy that impacted so many and we are incredibly proud that we can honour his legacy in the naming of the spectacular new PAC gym floor.”

The department has come a long way since its inception several decades ago. The new floor will host the 31 varsity teams that play for UW today, with over 600 student-athletes and 30,000 recreation participants.

“If I learned anything from my Papa, it’s that at the end of the day, it’s not about what you have or what you’ve accomplished, it’s about inspiring and lifting others while positively impacting lives,”  Totzke’s granddaughter, Carly Cousineau,said. “It’s about what you’ve given back. That is success. That is creating a legacy.”

Though the floor will not be used for any varsity competition for the time being, the UW Athletics Department is looking forward to being able to use it when sports return.

“Although it is unfortunate that we cannot yet have varsity competition on the floor, I am thrilled to see students enjoying the shiny new surface. When we finally can resume game action on the floor, it is going to be the premiere venue for student-athletes and fans,”  Webster said. 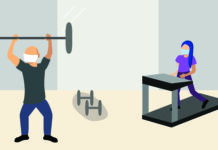 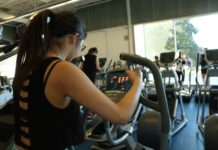