Now, a new study confirms that first-year weight gain is a result of shorter sleep durations. Researchers looked at 132 first-year Brown University students, where each student kept a diary, and over nine weeks, more than half had gained roughly six pounds. They found that those who gained weight were also scrimping on sleep, getting far less than the recommended hours of sleep. All these students stayed up until the late hours, turning in at 1:30 a.m. on average.

Generally, being sleep deprived, students will then look for unhealthy food options. Variability also plays a role in sleep deprivation. Students’ class schedules that typically vary throughout the week affect their sleep patterns. As a person gains weight, especially in the trunk and neck area, the risk of sleep-disordered breathing increases. If a person is struggling with these issues, then he or she may not be as motivated to exercise or maintain a good diet. This indirectly leads to the possible development of other high-risk diseases. When sleep deprivation leads to daytime fatigue, it may be much harder to sustain a balanced workweek. You may begin to skip morning lectures in order to obtain those sleeping hours or may hand in assignments late.

From the study, it was also found that sleep patterns differ between genders. In general, women got a more consistent amount of sleep than men and they tended to go to bed earlier, but women woke up earlier too, which may account for this discrepancy. By contrast, because men were less consistent with their sleep schedules, how much they slept day-to-day fluctuated more. On average, men got up at 9:15 a.m., and women at 8:54 a.m. Men tended to roll out of bed to get to class and hadn’t necessarily brushed their teeth or showered. They might also skip breakfast, which is considered the most important meal of the day.

The issue here may not be addressed clearly and it requires additional research. This will rely more on how students cope with stress since many students experience weight fluctuations that come mostly from academics as well as general day-to-day life problems. While it is important for parents to prime their children by encouraging good sleep habits , what would be significantly more helpful in the long-term would be to teach high school students skills for coping with stress. 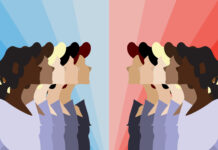