Twenty per cent of the 3,400 students involved in the study were either cutting their food intake for weight loss purposes or to get drunk faster, the study concluded.

Sandra Ace, a registered dietitian at UW’s Health Services, said she would not call drunkorexia a “disorder,” but instead a “phenomena” or “observation.” It’s a phenomena that can occur as a subsection of both alcohol misuse and eating disorders.

“It has not been defined in any clinical way as a disorder,” Ace said. “I’ve heard of the term before. I did mention in it to Sandra Gibson, our manager of health education, and she said it was on the agenda for the next regional alcohol meeting with people from public health, campuses, and regional police.”

Drunkorexia, according to Ace, has both long-and short-term health consequences. Students could experience significant problems with focus, concentration, memory, and decision making that can negatively affect their academic performance.

“This pattern of restrictive eating and alcohol misuse can have  very serious and harmful consequences for both physical and cognitive health,” Ace said. “It is a slippery slope that also puts students at risk for developing eating disorders and substance abuse addiction problems.”

A short term risk of drunkorexia as a behaviour includes something as extreme as cardiac arrest due to an imbalance of electrolytes in the body.

Potentially more worrisome were some of the findings collected in a another 2007 study, conducted by the American College Health Association (ACHA) and the National College Health Association (NCHA). The ACHA-NCHA study found that from a sample of 71,860 students at 107 post-secondary institutions, 42 per cent of females and 22 per cent of males surveyed reported dieting to lose weight within the previous 30 days. Ace said the findings were “very large and concerning numbers.”

When it comes to drunkorexia, even though none of Ace’s patients have come to her office using the term, she said she’s only treated and is currently treating one patient who restricts food intake before drinking in order to prevent possible weight gain. On a campus of about 30,000 students, that may mean students aren’t seeking help.

Ace suggests that the reason why students may not be coming forward to seek professional help when they realize they’re engaging in this activity is because it’s referred to as a “phenomena” and not a “disorder” — which might give students the impression they don’t have a problem.

“If you’re doing it and your friends are doing it too, you’re not necessarily seeing it as ‘this is what university students do,’ ” Ace said. “There is not really a recognition that there is something extremely unhealthy about this and that it’s a risky behaviour.”

Note: For those looking for professional assistance in dealing with problems such as drunkorexia, help is available by contacting Health and Counselling Services.

What to do in Waterloo this April 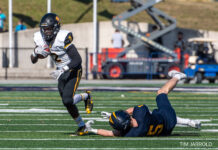