Dr. Gary Bruce, history professor at the University of Waterloo, will be speaking about “Humans Animals, and Nazis on Display: The Berlin Zoo in German History” in a public lecture. The Waterloo Centre for German Studies announced that this event will be held at the Knox Presbyterian Church (50 Erb Street ., Waterloo) on Wednesday, March 6, 2019 at 7:00 p.m.)

The event is free for all but the organizers have recommended registering for it on eventbrite.ca.

The zoo was a major part of Berlin’s social life for more than 170 years. It will look at some of the most iconic moments in the zoo’s history, including its exhibition of ‘exotic’ humans in the 19th century, its attempts to ‘breed back’ extinct species under the Nazis, and the fate of the animals through two world wars and the division of the city. Germans shape their views on the animal world, as well as the human world,” Bruce told Imprint. “People can absolutely attend without any prior knowledge. The talk is geared toward a broad audience.”

Bruce will talk about the history of the Berlin zoo in terms of the different political eras Berliners experienced, and their attachment to the zoo.

The talk will also discuss Bruce’s new book Through the Lion Gate: A History of the Berlin Zoo. “As much as the subject matter is the Berlin zoo, my book is equally about German culture and society, and the place of animals in human life. Today, about  3.5 million people visit the Berlin zoo annually. I wanted to offer a historical explanation behind this staggering popularity,” said Bruce.

Copies of the book will be sold on site by the Waterloo Campus Bookstore.

Why thrifting is the best way to shop

Meet me in Tokyo 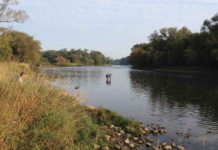