From Feb. 6 to 8, the Faculty, Alumni, Staff and Students (FASS) Theatre Company will present their Winter 2020 show, Nothing Beats Rock! a historical musical odyssey, at the Humanities Theatre in Hagey Hall, FASS does not miss a beat with the educational-alternative. I got a sneak-peak of the first act and it was amazing to witness and be a part of.

The writing is truly magnificent. First off, you know it’s going to be a great show when the story is narrated by an overly-excited dog and a goose with conniving vibes (as if anyone had any other depictions of Waterloo geese). Nothing Beats Rock! Goes to the stage with ambition and a hefty task of covering the different eras of Earth since time began. SPOILER ALERT: It was done flawlessly. Each scene was a unique experience, taking you from the first conception of an emoji during the stone-age, modern Olympic sports in a not-so-modern ancient Greece, a quack of a doctor setting up shop in medieval times, and the bamboozlement of proper hygiene during the era of ‘witch-hunt’ (before Trump brought it back). All in the first act.

From subtly breaking the fourth wall to not so subtle (but really self-aware) ‘dick jokes,’ the execution and delivery of each punchline hit the right cues. The timing and spacing of it all were exceptionally done, as nothing seemed forced or unnecessary. Everything that was said and done had a purpose, whether it was for audience enjoyment, to set up the next line, and in most cases both!

A lot of the character names were cheeky during their own part such as an Olympian named Wayne Granitesky, a patient names Pat Tient, and tourists Dee Wayne and Laroche Johnson.

With a show titled Nothing Beats Rock! You expect two things: one, rocks are praised and worshipped and two, the music is fire. FASS is always on the ball with creating parodies of popular songs to fit the tone, setting, and context of the scene and they did it again with Nothing Beats Rock! I don’t want to reveal too much, but my favourite was done at the end of the first scene titled “My Rock!” which was a parody of Lin-Manuel Miranda’s “My Shot!” from Hamilton.

The performers did an impeccable job singing/rapping a rather complicated song, and it really set the atmosphere and energy for the rest of the show.

The performers were all a joy to watch; the cast of Nothing Beats Rock! executed the script flawlessly. From the time the lights dimmed, these individuals lit up the entire room with their high energy and pure talent. Every line was delivered comedically pure and raw, and nothing seemed forced.

All of the players had great chemistry on stage, playing well off of each others energy.

A majority of the cast are playing multiple roles throughout the scenes, and they dove deep into their character’s archetype and made sure that each new character being presented was distinctly different in either the tone, pace of speech, body language, and overall “personal vibe.”

It is truly an awe that can’t be described by words on paper, and you need to witness yourself.

Nothing Beats Rock!  is going to be a spectacle that I encourage everyone to go see.

I have only seen the first act, so I am dying to know what the rest of the play is going to be like, as the satire of current times and the future will be explored.

From what I’ve seen, it’s shaping up to be five out of five stars show. 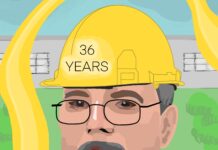 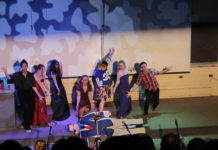