In today’s English-speaking world governed by democracy, where imperialism is not something to celebrate but to apologize for, what is a monarchy for?

Writer Peter Morgan has a fascination with the changing role of the crown in society, and the conflict between being a human being and embodying what is a thousands-year-old symbol of power.

The Crown is Morgan’s third and latest biopic of Queen Elizabeth II. Starting with her marriage to Prince Phillip while still a princess, the 10-episode series is an opulent, intimate, and at times overdramatic look at the machinations behind the crown and the woman and family squashed underneath it.

The series begins with Princess Elizabeth’s marriage in 1947. Each episode follows the same general framework of Morgan’s The Queen, The Audience, and even Frost/Nixon, where he explores the very personal ramifications for powerful people at the heart of a single historical event in depth.

I would almost call these “cinematic portraits” rather than traditional dramas. The historical events are merely a background to growing the characters we see on our money and in our parliament yet are still so mysterious to us.

The Crown’s estimated $156 million budget is Netflix’s largest to date, and the investment shows in the should-be Oscar-winning film aesthetic, costumes, and talent. Combined with the palaces and mansions, the show drips with high class and ageless tradition, making the very human vulnerabilities of the characters stand out more. It also makes the royal family feel trapped — once Elizabeth II holds the crown, she and Phillip can never leave the rich but cold aristocratic world.

Claire Foy brings a lot of nuance to the role of Queen Elizabeth II. She’s almost playing two characters — Elizabeth Mountbatten, a wife and mother conflicting against Queen Elizabeth II, ruler of the realm. As the audience, we can see when a woman or Queen is speaking. Foy portrays the frustration, fears, and loneliness behind the careful control that a queen — and a woman of the time — must always show. Only one can survive under the weight of the crown.

Sometimes, the drama feels forced, like the writer is tacking on fake tension to events that aren’t really a big deal. But like I said before, the real show happens in the characters, and I could forgive a few soap-opera moments if it meant a relationship was strained just a bit more.

The Crown is one of Netflix’s most ambitious projects yet, and I think it’s one of the best shows they’ve ever made.

The Crown is available on Netflix now. There are plans for five more seasons.

Getting High on Campus: Part 2 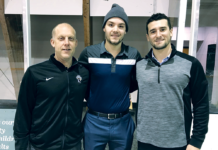 A new brand of Warriors