Every fall, UW hosts the Don Mills Classic, a cross country meet which winds through the fields around CIF.

The 23rd edition took place on Oct. 5 and featured over 144 runners from around the province. The meet featured two races, one for each gender, with two divisions each— an 8km varsity division and a 4km alumni division.

The course was designed as a 2km loop and stuck to the grass trails which loop around Columbia Lake at UW’s North Campus.

It was mostly flat with a few gentle hills, meaning runners were able to run fast times compared to most other courses. The start and finish lines were both located around the baseball diamond west of Warrior Field.

The men’s race was the first to begin, with the start gun fired shortly after 9:30 a.m.

About one km in, a lead pack of five emerged which including Felix Lawson, UW’s top runner. The pack stuck together until the final kilometre, when Laurentian’s Eric Gareau pulled away and won the race with a time of 26:13.

Lawson would finish the race fourth overall with an impressive time of 26:42. Six UW runners finished in the top-20.

The women’s race began an hour later with 50 runners competing.

Only six runners competed in the men’s alumni division. Warriors’ alumni Nicholash Bedi finished first with a time of 13:22 for the 4km race.

Thirteen runners lined up for the women’s alumni division, which was won by LTTC’s Holly MacGillivray in 15:32.

The next race for the cross-country team is the McMaster Open on Oct. 11. 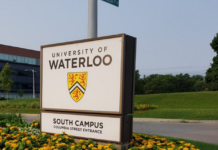