Global youth climate movement, Fridays for Future, organized a shoe strike in order to bring attention to the current global climate emergency. The event was hosted at Waterloo Public Square from 9 a.m. to 10 a.m. on Friday, Sept. 25, –  a global day for climate action.

The event marked the one-year anniversary of the Global Climate Strike, hosted in Sept. 2019, with more than 5,000 participants from the Waterloo Region. Due to the onset of COVID-19,  this year’s event was hosted on a smaller scale, following social distancing guidelines with the aim of building a “thriving, caring, low-carbon society in Waterloo Region.”

“Last year, over 5000 people gathered in-person for the 2019 Climate Strike in Waterloo Public Square – while of course we could not have a similar gathering this year, it was very clear from the generous donations of shoes and boots made, and all the positive messages we received, that this region still cares deeply about the need for climate action,” Kai Reimer-Watts, a core organizer of the event, said. “All shoes and boots will be passed on to people living unsheltered in the region, in partnership with Unsheltered Campaign.”

Donations including warm winter shoes and boots were made by participants. The public response to the shoe strike was positively large according to the organizers of the event.

“Turnout in terms of in-person volunteers was small but mighty, as we wanted to limit the number of in-person volunteers due to COVID. Hence, the focus of the event was not on the number of people who showed up, but rather on the symbolic message sent by the over 400 shoes and boots donated from across the community, representing the hundreds of people who would have liked to attend but couldn’t,” Reimer-Watts said.

The main goal of Fridays for Future is to educate the public on the adverse effects of climate change and reduce the carbon emissions in the region by at least 50 per cent by 2030 – also known as 50×30 – in order to uphold the country’s commitment to the Paris Climate Agreement, and  leaving a more sustainable environment for future generations.

The shoe strike also symbolizes the launch of 50x30WR.

“50x30WR, which aims to push councils and the region to adopt a 50% emissions reduction target by 2030 – as climate science makes clear that this is really the minimum commitment required to protect us all from accelerating, disastrous climate change impacts,” Reimer-Watts said. “By committing to 50×30, Waterloo Region can accelerate the much-needed transition to a low-carbon, more sustainable and just economy for all. In the face of the climate crisis, we can choose not to wait as the crisis worsens, but instead act now for a better future, developing much-needed solutions while building and celebrating together the growth of a more sustainable and equitable community that we aspire to be.”

#GRADTalks Beyond 60: Health, Age, and Wellbeing 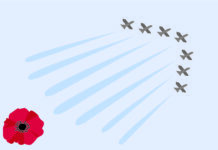 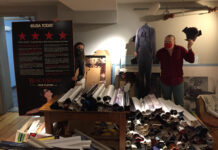