The Suncayr Marker was developed in the fall of 2013 as the founders’ fourth year design project. When they realized that it had the potential of becoming a consumer product, they decided to start Suncayr.

“Everyone on the team has experienced painful sunburns, even while wearing sunscreen,” the young CEO remarked. While most people accept defeat against the nuisance of irritated skin under the scorching summer sun, Pautler and her team decided to do something about it. “We knew we had the tech background to do something about [sun protection],” she said. Beyond sunburns, the Suncayr team is also concerned about the long term effects of sun exposure: skin aging and skin cancer.

The University of Waterloo is well-known as an incubator for entrepreneurship and innovation, and as a result, a “startup culture” has evolved on campus. As Pautler pointed out, “It’s incredibly exciting to work through each day’s unique challenges … [and] we’re lucky enough to be able to apply our undergraduate education.”

While owning your own company and being your own boss sounds appealing to aspiring entrepreneurs, managing a startup is not all that it seems. Pautler admitted that there are some common misconceptions: “Startup life is really not as glamorous as some people make it seem. It’s a lot of hard work, late nights, and expectations.” Nevertheless, the Suncayr CEO enjoys the fact that “everything I do has an immediate and significant impact to the whole company.” She also added that “even things like responding to emails become interesting because you never know what opportunities each email could lead to.”

Despite all the independence that a startup offers, too much of it can sometimes seem overwhelming. “It can be difficult to make key decisions when you don’t have someone immediately above you for advice,” Pautler remarked. “You’re constantly thinking about those decisions. You never truly stop working, even when you’re not physically at work. It can be pretty overwhelming and makes work-life balance difficult.”

Startup culture — though challenging — can become a learning process for those who choose to venture into the unknown. “I’ve learned an incredible amount about myself — from how I like to organize my day, to how I respond when someone disagrees with me,” Pautler shared. She also quipped that, “I’ve learned a lot more about my co-founders than I had anticipated. You don’t really realize how much it resembles a marriage until you start a company with someone!”

“Entrepreneurs start companies because they are passionate about solving a problem that they see in the market,” Pautler told Imprint. “Don’t start a company for the sake of starting a company. Only take the plunge if you’re so passionate about your product or service that you’re willing to spend at least the next three years of your life on it.”

Presently, Suncayr is wrapping up technical development and is in the process of obtaining approval from Health Canada. Pre-sales will launch this September and a full launch is scheduled for next summer, when Suncayr will sell markers online and in retail stores.

The Suncayr team also plans to expand globally. By making their markers available on shelves worldwide, Suncayr aims to spread knowledge about UV exposure to consumers.

There are also plans for next generation products, but for now, Pautler said, “We’re just focusing on getting Suncayr to market!” 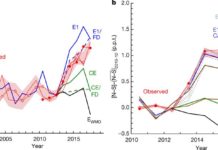