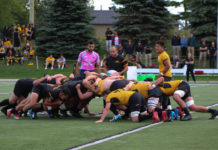 Men’s rugby comes up short on Black and Gold Day