Imprint sat down with Mary Wells, associate dean of outreach for the faculty of engineering, to discuss what she thinks are some of the challenges ECE programs in UW, and across the country, face in trying to recruit more PhD-qualified female faculty.

Wells talked about a study conducted on girl guides in Grades 4 to 6 that illustrated the degree to which engineering, especially ECE, is masculinized. In the study, they asked the girls to draw what they thought an engineer looked like at work. The results were conclusive and reinforced why Wells is a strong believer in early engagement — as early as elementary school.

“They were predominantly male pictures; they were usually in a uniform. They didn’t look happy… They had tools… The really stereotypical view of an engineer. They were isolated, they were alone,” Wells said. “It’s very masculinized, and the kind of work they’re doing looks like not [much] fun.”

Wells said another root of the problem could be the small pool of female PhDs to pick from. According to the 2013 Engineers Canada’s report, approximately 12.4 per cent of PhD degrees awarded in the fields of computer and electrical engineering belonged to women — down significantly from last year’s figure.

“It could be that many of these undergraduate women are getting great jobs after graduation, so there’s no desire to go on to do graduate work,” Wells said. “It really is a reflection of the fact we need to get more women doing PhDs, in particular in electrical and mechanical engineering, so that it can open up the pool of potential applicants.”

With universities trying to attract more qualified women faculty, women with PhDs in these fields stand to gain. However, Wells said the high demand makes recruitment for post-secondary institutions difficult and highly competitive.

The low number of ECE PhDs awarded to females is not surprising considering 10-12 per cent of students in ECE undergraduate programs are females. This figure almost directly matches with the figure of ECE PhDs awarded to women. In contrast, in biomedical engineering, 50 per cent of students are females. The percentage of female students in programs like chemical and environmental engineering are very similar.

Wells suspects the reason fields like biomedical and environmental engineering have a higher degree of female participation than ECE is because they feel like they can have a direct impact on people and the environment.

“When you hear the word [biomedical engineering] you automatically think health. Many women are attracted to the life and health sciences because you have an impact on people’s health, people’s lives,” Wells said.

The challenge when it comes to attracting women to ECE fields is to visually narrow how these “broad” fields are perceived.

“Mechanical engineering, … you think of a car and you don’t see how fixing a car helps the world. You forget there’s all sorts of things mechanical engineers do to help the human body with artificial limbs,” Wells said. “It’s such a broad discipline that’s hard to capture in a visual image and these are our biggest programs.”

Wells was surprised to learn  that there is little correlation between the number of female faculty and first-year female enrolment. One of the correlations she found is the effectiveness of outreach programs that explain to girls the impact they can have in pursuing these engineering programs.

UW runs specific programs in the later high school years to make sure they take the right math and science courses. Wells said a big “bottleneck” that represents a “barrier” is the fact that only 33 per cent of female high school students take Grade 12 physics,  which no student can gain admission to an engineering program without.

Wells said that although numbers remain low, it’s not because of a lack of effort. It’s all about increasing the pool. 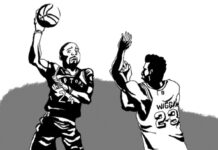