In a nutshell, everybody wants to know more about Nintendo’s mysterious new piece of technology.

Well the wait for information came to an end as the Big N let some significant information trickle through at their latest investor’s meeting. Despite many predictions by market analysts, the Nintendo NX is skipping this holiday season and releasing March 2017. While not officially set as a launch title, the newest entry in The Legend of Zelda series will release on both NX and Wii U in 2017.

Although there are still plenty of unanswered questions about the NX, these two pieces of information are huge in their own right. Not since the Dreamcast in 1999 have we seen a major video game system release outside of the holiday season. The holidays are considered the biggest months of the year for video games and electronics as a whole. For Nintendo to skip out on all those potential purchases that comes from the holidays shows their willingness to be prepared for launch rather than rushing the system out to make an extra buck.

I am personally happy that the NX is bumped into early 2017 because there are too many great games coming out all year round and I can’t keep up as is, let alone add an over $500 purchase to that. In all seriousness, pushing the release date into 2017 allows Nintendo to focus on giving the Wii U and 3DS proper swan songs. While these systems haven’t been the runaway success that the Wii and DS were, they are great systems that deserve a proper send-off, especially if the NX turns out to be the console-handheld hybrid we all want.

I know I glossed over it before, but the Zelda news needs to addressed on its own. And by on its own, I mean FOR THE LOVE OF GOD NINTENDO WHY ARE YOU MAKING US WAIT LONGER!? I am happy that we finally got all the will they, won’t they speculation over and done with, but to see the Zelda we waited patiently an entire generation for — seriously, people bought the Wii U just for this game — be given the Twilight Princess treatment is disappointing. Adding in the lack of a brand new Zelda for the 30th anniversary, the announcement stings a little.

I’m not saying my excitement for the game has decreased. In all honesty, hearing Nintendo is dedicating its entire E3 booth to the new Legend of Zelda has me believing this game is going to be something special. But onsidering how Zelda’s 25th anniversary coincided with the release of Skyward Sword, it’s just saddening to see Zelda’s 30th not get the same level of respect. My tune will change if Nintendo decides to give us a full-on sequel to A Link Between Worlds. Just sayin’.

Despite what people have been complaining about on the net, Nintendo’s two big announcements don’t mean there is nothing coming until March 2017. The list of 3DS and Wii U releases might not stretch farther than September at this point in time, but there are quality titles, such as Tokyo Mirage Sessions #FE, Zero Time Dilemma, and Shin Megami IV Apocalypse, that will make the most out of these systems. March 2017 may be the future for Nintendo, but we are still 10 months away with a whole lot of games to come. So sit tight and enjoy the ride. I know I will. 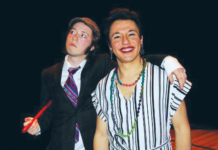