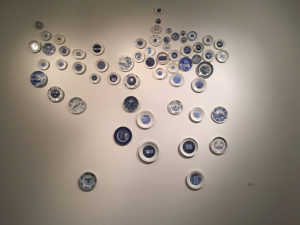 Hailing from Tehran, Iran and having immigrated to Canada since 1992, Soheila Esfahani explores a world suspended between cultural identities, a world that straddles both Iranian and Canadian culture yet neither all at once. Esfahani translates her cultural self-discovery into tangible realities, encouraging visitors to evoke personal interpretations to this in-betweenness.

Through her exhibit Cultural Translation: Negotiated Third Spaces and Those Who Live There at Conrad Grebel University College’s Grebel Gallery, “Esfahani questions displacement, dissemination, and reinsertion of culture by re-contextualizing culturally specific ornamentation”, according to the gallery’s description. It brings together a collection of art and objects both found and created, both souvenirs from her travels around the globe and hand-made.

Sprinkled across the centre of the gallery floor is a flurry of white porcelain birds embellished with culturally specific blue designs that Esfahani had hand-built and collected from souvenir shops and flea markets. Titled The Immigrants, the birds illustrate and highlight migration as souvenirs that physically transcend boundaries to be integrated into new cultures.

To the right, a wall is dotted by white ceramic plates also adorned in blue decals, featuring various culturally significant designs and events. This installation, The Immigrants: Canada 150, was inspired by an oil painting produced in 1922 by Frederick Verley, also under the title The Immigrants, which portrays immigrants disembarking their ship onto Canadian soil. As such, Esfahani’s 60 plates presents souvenir plates typically purchased and brought home by tourists, juxtaposed by plates ornamented by common clothing labels which disclose their place of origin.

In the gallery description pamphlet, Esfahani recalls the conflicting and contrasting feeling of belonging yet disconnection with her homeland when she had returned: “… I simultaneously experienced feeling connected and disconnected to the city – I was a tourist in what was supposed to be my home.” This inspired the following two installations: three wooden panels collectively named Portable Culture and A Trace of the Traceless.

While two out of the three panels feature ornate patterns in Portable Culture, one superimposed with a Canada goose and the other with a maple leaf, the third one displays a motif of repeated shipping pallets. A Trace of the Traceless incorporates objects acquired from Lake Louise to Dubai to Honolulu to Hoi An to Kitchener-Waterloo. However, all pieces are tied together by an “arabesque pattern replicated from the mosaic design of the interior dome of the Imam Mosque”, according to the gallery pamphlet.

Esfahani’s visual art has been shared across Canada from coast to coast, spanning distances parallel to her journey as an immigrant and the lengths to which she had travelled to acquire the subjects of her artwork.

Having received her Bachelor of Fine Arts as an alumna of the University of Waterloo, Esfahani is now a lecturer for the Studies in Islam program at Renison University College.

Currently, Cultural Translation is displayed until Dec. 20, 2018 and her work can also be found at THEMUSEUM in Kitchener and the Art Gallery of Windsor. 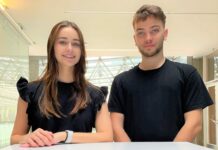 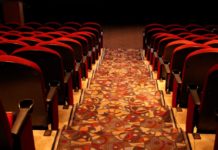 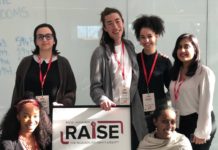 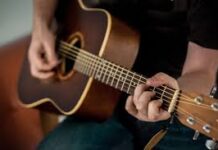