The platform document, which is entitled A New Plan for a Strong Middle Class, covers a wide range of topics and includes a section on the cost of their promises. The announcement  had a strong emphasis on promises aimed at helping post-secondary students.

Trudeau opened his speech by noting that WLU is named after his second-favourite prime minister, recalling one of Laurier’s key messages: “That we should adhere to sunny days. The idea that things like open dialogue, patience, respect, and compromise can go a long way.”

The speech included attacks on Stephen Harper’s economic record, with Trudeau saying, “the Canadian economy doesn’t depend on him[Harper], it depends on you.”

Laying out his plan for the economy, Trudeau noted that Canada needs a government that is ready to invest.

“It will take investments. Investment in jobs, in the middle class, in Canadians who are working hard every day to join the middle class,” said Trudeau. “The time to invest is now. Not because our economy has had a weak couple of months, but because under Stephen Harper, we’ve had 10 weak years.”

Post-graduation, Trudeau promised that recent graduates would not have to repay their loans until they are earning $25,000 a year. He also emphasized that these promises would not cost the provinces any money. For aboriginal students, Trudeau announced $50 million in additional money for the Post-Secondary Student Support Program.

The focus of the Liberal platform, as outlined by Trudeau, is to grow the economy, create jobs, and strengthen the middle class.

As well as the post-secondary announcement, Trudeau highlighted his party’s plan for the environment. This includes investing in clean technology, rebuilding credibility in the regulatory process, and being a positive actor on the world stage. He also promised to work with the provincial government to set emission reduction targets and to consult economists and scientists.

On the topic of transparency and accountability, Trudeau wants to make question period relevant again and promised to make the parliamentary budget office truly independent.

The platform release coincided with the news that the Trans-Pacific Partnership negotiations had reached an agreement. Trudeau was pressed by the media repeatedly to take a position. While he did not commit one way or another, he emphasized that the Liberal Party has consistently been in favour of free trade. He also promised to ratify the treaty in Parliament, and to have an open discussion within Parliament and with Canadians on the subject.

Trudeau is not the only leader to visit the region. Thomas Mulcair was in Waterloo Oct. 4 and Stephen Harper was in St. Jacob’s  Sept. 21. 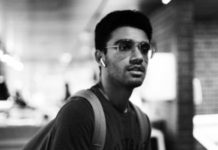 Campus Question: How have OSAP changes affected you?