Two female UW students notified UW police services (UWPS) about a man approaching them on campus. The first incident occurred Nov. 4, just after noon outside of RCH; the second occurred the following day around 11 a.m. on the physics roadway between CIET and ENG 3.

The two students were not connected, however, Staff Sergeant Dale Roe, operations manager for UWPS, said the similar times, locations, and description of the incidents and the suspect strongly suggest the same man was involved in both.

“We’re still actively investigating this and trying to identify who this person was,” Roe said. “What’s been encouraging is, as a result of that being posted, we have had some information come in that’s given us more opportunity to follow up on more leads,” he said.

In both incidents the suspect approached the female students and blocked their path. In the first reported situation, the male “grabbed her hand” and said something suggesting he thought she was good looking and that he wanted to talk to her.

During the following days’ incident, the other female student backed away when the suspect attempted to grab her, a similar conversation followed, however, the female student also reported the suspect tried to block her from walking away, and she was forced to run.

Roe said incidents like this have happened in recent history on campus and have been resolved. He said in cases like this one sometimes the suspect involved is “socially awkward and this is their way of trying to meet someone” and other times it is more concerning.

“We don’t know at this point in time, but we have to investigate to find out,” Roe said.

The suspect is believed to be a student. “It’s speculation, but that is our best guess at this point in time,” Roe said.

The suspect is described as an Asian male just over six feet tall with short, spiked black hair who spoke English with no accent. In the second incident, the suspect appeared to be under the influence of drugs or alcohol.

Students with any information are encouraged to contact campus police or use their anonymous reporting system.

Still no pedestrian road closure plan in KW until June 16...

Do we practice what we preach? 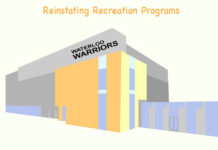