The company has been holding driver meetings and has issued an open call for potential drivers in the region. The announcement has divided politicians, city officials, and regulators, as well as caused concerns among the three KW-based taxi companies — Waterloo Taxi, City Cabs, and United Taxi, who argue that Uber will have a negative impact on their businesses. They also belive it is illegal and unsafe in most Canadian cities due to the lack of regulation behind the mobile app-based service’s drivers and cars.

For fourth-year UW student Matthew Smyth, the announcement of the possibility of Uber coming to the region was a positive one.

“I think that we as students should have options when it comes to transportation.

“Waterloo is already in developments of the LRT, which is another option of how students move around the city, so I feel like Uber coming to Waterloo would be beneficial for the student community,” said Smyth.

When questioned about his previous experiences with the local taxi companies, Smyth said, “I don’t think there is anything wrong with the way these companies work or any big flaws with them, but sometimes they take a long time to take your call, which is perfectly understandable, but also sometimes getting a cab late at night or when you’re partying late at night, it is pretty hard to get through to any of the three cab companies, which is annoying. Also, people tend to poach cabs from each other, disregarding if you called for the cab.”

Smyth has also recently tried the app called Gata Hub, a new taxi-ordering app that Waterloo Taxi is using for requesting taxis, but he feels like the app leaves much to be desired.

“I have tried the Waterloo Taxi app, and it does improve the way and convenience [in which] you communicate with the taxi company, but I feel like it is still lacking in some areas, unlike Uber, who lets you request what type of car is picking you up and the information and estimated arrival time of the driver,” said Smyth.

But when it comes to regulation and regional permits, Uber still has a long road ahead. Although the service is already up and running in Toronto, Ottawa, Montreal, Quebec City, Edmonton, and Halifax, cities like Hamilton warned potential Uber drivers that they risked fines of up to $5,000 and losing their car insurance if they were caught working for the company. In 2012, Uber was exiled from Vancouver because of the requirements placed by the BC Passenger Transportation Branch.

Although the decision to allow Uber to operate in KW has not yet been made, Susie Heath, spokesperson for Uber Canada, stated in a email to Imprint that “across Canada, people have been opening the Uber app and asking us to come to their hometown, and Waterloo region is no exception. Last week, Uber presented to key members of Waterloo regional council, highlighting the benefits that Uber can bring. We were pleased with the positive reception from council and will continue to work collaboratively to bring both riders and drivers better transportation options in Waterloo region.”

Waterloo regional councillor Sean Strickland has proposed that Waterloo region should embrace and work with Uber — he believes that Uber’s arrival to the region is inevitable.

“They are a $40 billion corporation and they are executing their strategy worldwide, and their arrival here is inevitable. I think that it would be beneficial to work with them to structure an arrangement in the Waterloo region that works well for our community,” said Strickland.

When questioned about the decision of the city of Hamilton to warn potential Uber drivers, Strickland said, “That is unfortunate, but [Uber] is also in the courts in Toronto and the courts of Ottawa, so I think what happens is that if Uber sets up they are in contravention of the existing bylaws, and it is the government’s responsibility to enforce their own bylaws. So if they were unable to come to an agreement with Uber and their setup, our bylaws would be enforced. My point is that I am hoping that we can find a way to come through with a Transportation Network Agreement [TNC]. The idea would be to restructure our bylaw, to allow for services like Uber and Lyft to potentially operate within the region and within confines of the bylaws.

“They have done this in other municipalities where they have signed this TNC and they have also done this in various states in the United States to make it a statewide legislation,” Strickland said.

Strickland also stated that services like Uber will have an impact on the local taxi industry.

“Well, I think, when these disruptive technologies come along, like Uber, it is pretty hard to stop them and it is better to work with them than to work against them, but we have to do what we can to ensure that passenger safety and licensing and all the other kinds of regulatory requirements are put in place as best as we can.”

Last week, Uber held a Q-and-A  session with city officials and regulators in which they addressed the recurring concerns that revolve around the app to Uber’s public policy manager, Chris Schafer.

Two of the main questions were how does Uber provide and ensure safety for its consumers and how does the service regulate and screen its cars and drivers. Uber drivers must undergo an annual screening including federal criminal checks, local police checks, sexual predator screenings, and a driver’s abstract check. Passengers can make complaints by  providing instant feedback after their ride and drivers must maintain a minimum rating to continue to drive.

Another main difference between Uber and taxi companies is that the driver and passenger identities are known before the transaction via signing up on the app. There is also no financial transaction during the ride, instead customers’ credit cards are on file and billed automatically for the trip.

Last December, a Massachusetts Uber driver was accused of sexually assaulting a woman who had requested a ride from the app.

Imprint interviewed a driver that currently works for a local taxi company, who wanted to remain anonymous for fear of repercussions. The driver stated, “I would be interested in driving for Uber. The only concern I have is that I would need to use my own car, and I am not sure how the pay compares to the salary I get now. I think services like Uber will take a lot of customers from the taxi companies, but if you are a good driver people will still want to hire you and your service.”

The local taxi industry is mobilizing against Uber, with a delegation planned before regional officials to protest the service.

Through our Waterloo Windows: Lifting Spirits and Keeping Communities Together 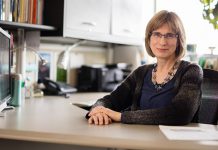