Rethinking Mythos: A Mid-Career Retrospective of Neil Tetkowski will be exhibiting for the first time at the Canadian Clay and Glass Gallery (CCGG). It “surveys the work of the American artist Neil Tetkowsi created over nearly 40 years and represents a significant milestone of artistic accomplishment,” wrote George Bernard Singer, original curator of the exhibition in the show’s catalogue book.

When questioned on why Tetkowski was chosen over other Canadian artists for this solo exhibition, the new curator of CCGG (as of 2014) Sheila McMath said, “The gallery’s mission and mandate celebrates Canadian contemporary artists first and foremost … but in art, national borders are permeable. Artists from all over the world collaborate and influence each other in profound ways … Tetkowski also has a deep affinity for the Ontario region as he recently made work in the Niagara Gorge, a space shared by Canada and the U.S., and he spent his formative years surrounded by the Niagara River on Grand Island.”

The exhibition occupies all four spaces of the CCGG. Singer wrote, “The exhibition points to the artist’s roots in creating circular works … it also includes two large-scale sculptures and a photo installation that are fully at home within … the gallery’s spaces.”

One of the major works in the exhibition is the Common Ground World Project. According to Tetkowski, the project was inspired when “somewhere around 1997, I got this idea: what would happen if we took earth from two countries that didn’t like each other and blended it together?”

The project was put in action in 2000 and was completed in 2002. It was displayed for a time in the United Nations visitor lobby in New York City.

The work consists of three parts: Installation 188, a series of numbered glass bottles containing clay from each of the 188 respective United Nations countries in 2000; a graphical text where their names are placed beside their corresponding number; and the World Mandala Monument, a large clay disk containing numbered clay pieces arranged in a spiral formation. At the centre of the disk are two handprints, one of a 100-year-old woman and the other of a Chinese baby (who in 2015 is now 15 years old).

Tetkowski, who was quite happy with this work, said the goals of the project were achieved: “It did prove to be very accessible artworks … [and] doesn’t matter if they’re eight years old or 80 years old, doesn’t matter their financial or cultural background … everybody can relate.”

Rethinking Mythos: A Mid-Career Retrospective of Neil Tetkowski will be exhibiting at the CCGG near Uptown Waterloo March 29 to June 21, 2015. 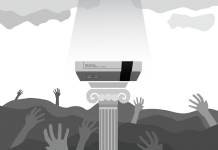 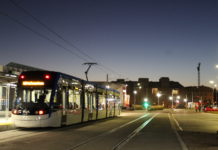