Over 6 million people around the world took time off of work and school to protest inaction on climate change this past Friday, Sept. 27.

The strike was the second global edition of the movement known as Fridays for Future, started by renowned climate activist Greta Thunberg in 2018.

Originally based in Sweden, Thunberg’s home country, the movement increased globally, gaining attention from over 100 countries resulting in the global strike that started on September 20.

UW’s march to join the greater Waterloo strike was one of the thousands of events held that day around the world.

Students and faculty met in the Arts quad at 10 a.m. before proceeding to Uptown to strike in the Waterloo Town Square.

The square was filled with signs raised above heads and strikers across the street dangling banners out of buildings.

Attention was focused on the center of the square, where speakers took turns sharing their voices on the matter.

Leading up to the global strike, UW undergraduate student Bei Niu organized several independent climate strikes for Fridays for Future that took place on campus over the course of three weeks.

“I just wanted to do it every week so that it doesn’t just happen once, and everyone will forget about it,” she said.

Niu added that the reason she organized the additional strikes was to urge UW to take action.

“I think the University of Waterloo has got its strength in academic research and programming, however, there are plenty of climate researchers out there as of now, so what is the university doing with the already existing available researchers? Especially with the fossil fuel investment, [which was] $68 million as of 2017. By investing in fossil fuels they are directly supporting the sector and profiting from it, they could divest, just like the University of California did recently,” Niu said.

Protesters feared inaction would be detrimental.

In 2015, the United Nations’ Intergovernmental Panel on Climate Change advised that global temperature increase should be kept under 1.5 OC by the year 2100 in order to reduce serious environmental and health impacts.

The global temperature is currently set to rise by between 4.1 and 4.8OC according the independent scientific analysis called  climate tracker.

“If we continue with business as usual, today’s youth are the ones who will have to live through the increasingly severe impacts of climate change.

We as a society should be listening to the young climate strikers, and doing our part.” said Amelia Clarke, Associate Dean of Research in the Faculty of Environment.

Canada’s House of Commons declared a national climate emergency this past June due to Canada warming at twice the global average.

This put Canada at, “insufficient,” on the global climate tracker, along with nine other largely populated countries.

“Declaring a climate emergency is not something that I can applaud when the very next day, those very same people are announcing an expansion of an oil pipeline breaching,” Parul Tambe said in her speech.

The United Nations Intergovernmental Panel on Climate Change warned the average global temperature is already one degree higher and that it will reach 1.5 degrees by 2040 unless the world steps up its planned action to cut emissions in a big way.

“The most recent estimates suggest we only have about a decade to stop emitting, but there is still time, and even if we don’t hit the target, every half a degree of warming counts because of all the lives we could save.” Rebecca Saari, a professor in the department of Civil and Environmental Engineering.

Hearing the voices of Holocaust survivors 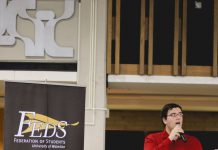 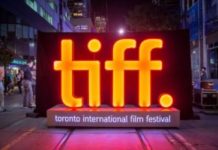