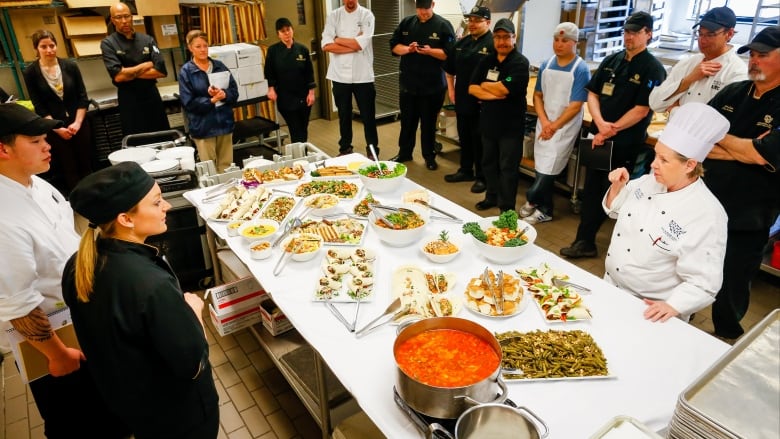 Vegans and vegetarians are about to have more dishes to choose from in the cafeterias on campus.

On Jan. 10, the University of Waterloo Food Services (UWFS) participated in Food Forward, a two-day food training program conducted by the Humane Society International (HSI). Food Forward has helped chefs and their institutions add more vegan and vegetarian recipes to their menus in order to satisfy the increasing demand worldwide for these cuisines. Chefs and their staff are educated about why an increasing amount of people are choosing to switch to plant-based diets, and then taught specific meat, egg, and dairy-free recipes. “Our students are always looking for more plant-based options for sustainability reasons, lifestyle choices, and animal welfare reasons,” Gordon Cooledge, executive chef at UW, told The Charlatan.

Campaign Manager Food Forward’s Riana Topan told CBC News that “younger people are more likely to identify as vegan or vegetarian, but universities are struggling to find ways to meet this demand.” Topan attributed this to the fact that chefs aren’t always taught how to create appealing, plant-based dishes.

The program began in the United States in 2015, due to a request by Harvard University to help expand their plant-based food options, and was later implemented in many American schools. In 2017, HSI brought the program to the University of British Columbia, making it the first Canadian University to receive this training. Since then, many universities including Queen’s, Guelph, McMaster, Ottawa, UofT’s St. George campus, and the Northern Alberta Institute of Technology have all hopped on board. Following the University of Waterloo, the program will make its way to Carleton University.

“[Those against the program] think that we’re trying to convert everybody to veganism and that we’re trying to say that they shouldn’t or can’t eat meat, or eggs, or dairy anymore. And that’s really not what we’re about,” Topan told The Charlatan. In contrast, all that Forward Food is saying is that, if you’re looking for plant-based food, the cafeteria will not be short of options.

Participating in the HSI’s Food Forward program is not the first initiative UW Food Services has undertaken to benefit its vegan and vegetarian customers. Last September, UWFS opened FRSH in the AHS expansion, an eatery focusing on menu items featuring plant-based proteins. Some of their options include custom made rice/quinoa bowls, salads, and freshly-squeezed juices. FRSH has been a hit amongst students and almost always has a long line looking for a fresh meal.