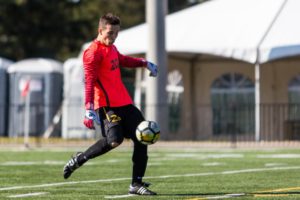 On 29 September 2018, the University of Waterloo Men’s Soccer Team faced off against the University of Windsor Lancers at Warrior Field. The game was scrappy towards the end but neither team was able to find the back of the net as they drew 0-0. Ranked third in the OUA West Conference with 18 points and a 6-4-0 record, the Warriors looked to increase their chances of playoff qualification while the Lancers aimed to improve their 5-4-2 record and put themselves in playoff position.

Kicking off at 3:15 pm, the first-half was a back-and-forth affair as both teams struggled to create quality scoring chances. Waterloo found some success working down the right flank through right back Luka Frankovich and winger David Chung, but none of their exploits resulted in a goal. Both teams went into the half having to rethink their strategy and come out stronger.

The game began to open up in the second half as Warriors Coach Mark Worton swapped Chung to the left wing where he was able to be much more successful against smaller defenders. His strong positional play and quality touches resulted in a few opportunities for the Warriors but players were unable to finish their chances. As the Warriors began to push farther up the pitch in search of a goal, the Lancers started to launch successful counter-attacks, playing up the flanks and crossing the ball inside the penalty area to generate scoring chances. However, Waterloo keeper Matt Papadopolulos stood tall on his line to keep Windsor off the scoresheet.

In the 76th minute, Waterloo centre back Florian Bruckeder received a straight red card for a strong sliding challenge. The Warriors tightened up their defence and pressured the Lancers for the final 14 minutes, making it difficult for the Lancers to generate chances with the man advantage. However, in the final minute of stoppage time, a miscommunication between Papadopolulos and the Warriors’ back line left the ball available in the penalty box but the Lancers were unable to capitalize on the opportunity.

When asked about the game, Chung said he was “disappointed with the result” but noted that the team “defended well down a man” following the red card. Overall, he was proud of team’s defensive effort to gain a point in the standings.

The Warriors’ next game in Wednesday, 3 October against Wilfrid Laurier University at Warrior Field. 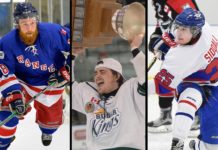