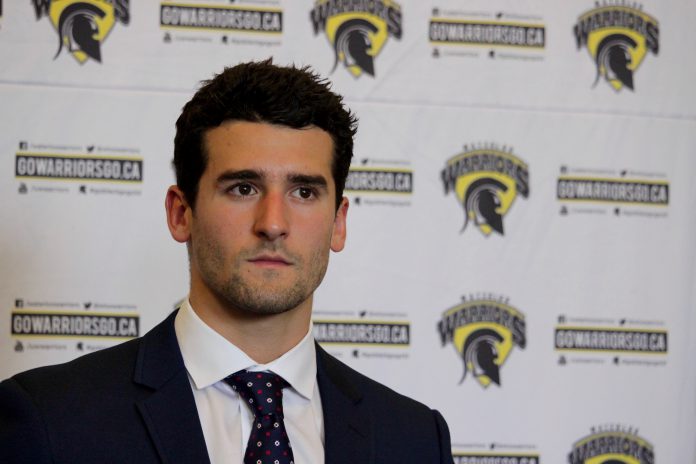 Ben Fanelli is ready to take on a new challenge as the Waterloo Warriors prepare for their season opener against the Guelph Gryphons on Wednesday, Oct 5 in the newly renovated Columbia Ice Fields Arena.

Fanelli, a former captain of the Kitchener Rangers, the local Canadian Hockey League (CHL) team, was hired as an assistant coach and Warriors hockey camp co-ordinator in the offseason. Fanelli hopes to pass along some of the tips he learned from his mentors throughout his time with the Rangers.

“From a defensive side of things, I believe I will be able to offer some offensive and defensive ideas that I was taught by my influential and knowledgeable coaches in Kitchener,” Fanelli said when asked how his experiences in the CHL will transfer over to his new OUA role. “Ultimately I want to do what I can to let the awesome [defense] we have play without overthinking [in order to help them] enjoy playing the game, because when players play in that mind-set, they play their best hockey.”

Fanelli is well known in the Waterloo Region for what he’s been able to accomplish on and off the ice. As a 16-year-old playing for the Rangers, Fanelli received a brutal hit by then Erie Otters’ forward Matt Liambas that fractured his skull. Doctors believed Fanelli would never play hockey again, but against all odds, he went onto play three seasons for the Rangers, including the 2013-14 campaign where he was awarded captaincy honours.

Fanelli went onto co-found EMPWR, an organization created to advance the recovery of concussion injuries. Fanelli believes some of the skills he acquired as a captain and through his role with EMPWR will translate well behind the Warriors bench. “I learned about the value in positivity behind the bench, team camaraderie, pulling on the rope in the same direction, and how to work towards that, both on the ice and off the ice,” he explained.

Fanelli doesn’t believe this year’s Warriors will have any problems creating that positive team environment. “I don’t think I will have to do much work in that area as this UW team is full of well-rounded, down-to-earth, hard-working young men that do all those things already. It is awesome to be a part of.”

Fanelli has one particular date circled on his calendar. A Nov 2 battle against the Wilfred Laurier Golden Hawks at the Kitchener Memorial Auditorium, the home of the Kitchener Rangers. Fanelli, currently finishing his communications degree at Laurier, is excited about getting to coach against his former teammate, Derek Schoenmakers.

“I am excited for many reasons. To be back where I spent 5 years – just a great place to be, to play against Laurier in a friendly rivalry, seeing (Mike) Morrison (Former Rangers’ teammate of Fanelli’s and current Warriors goalie) and Schoenmakers back on the ice where they spent some exciting time in their CHL careers, and finally, to be able to stand where five extremely influential coaches stood to coach me back in the day.”

Fanelli believes Behenna’s departure leaves more opportunity for new players to step-up and fill the big shoes left by the 2016 University of Waterloo Male Athlete of the Year.

“I wouldn’t look at this situation as a loss, but more of an opportunity for the rest of the team. In the dressing room, everyone now knows they need to chip in offensively and that there is no reliance on one line or one individual for scoring. I think it holds everyone in the room accountable and is a great position to be in for everyone on the team.”

Fanelli continued to preach about his aspirations to build a positive environment around the team: “Everyone is going to have to find ways to score, get rebounds and put the puck in the net. It is amazing what players can do when someone believes in them. When someone is told they ‘are not a goal scorer,’ it is hard to generate offence. When they are told otherwise, who knows what can happen.”

The Warriors are looking to avenge a first round upset playoff loss to the Ryerson Rams last season. Waterloo might look different this season, but Fanelli and the rest of the coaching staff believes the team has the potential to finish what last year’s team started.

“I’d be lying if I said anything less than a championship would be a success,” Fanelli told Imprint. “The team and I are approaching that expectation with excitement, not with immense pressure on our shoulders.”

Fanelli believes the team possesses enough skill to make the vision a reality, “The game of hockey is getting faster and faster. We have a team of guys that can skate and skate well. Our speed and agility paired up with a lot of hockey sense is going to give us the chance to win every single night. Again, this is exciting and achievable, not a far-fetched dream.”

In preparation for the season opener against Guelph on Oct. 5, the Warriors finished the preseason 3-1, with wins over Laurier, Laurentian, and Carleton, and loss coming from the University of Miami (Ohio).

Which Hogwarts house are you in? 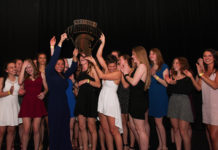