Researchers at the University of Waterloo, Professor of Astronomy Mike Hudson and former master’s student Seth Epps used weak gravitational lensing to capture the first image of dark matter, allowing to see and measure it. When the significance of the discovery resonated throughout the scientific community, UW found itself in the center of attention, where two of its researchers managed to map dark matter.

“For decades, researchers have been predicting the existence of dark matter filaments between galaxies that act like a web-like superstructure connecting galaxies together,” said Hudson. “This image moves us beyond predictions to something we can see and measure.”

Our universe consists of matter which has mass and takes space. By itself, dark matter constitutes 84.5% of the universe’s total mass, but no one could visualize it.

The problem with identifying dark matter is that it remains invisible to the electromagnetic spectrum. Technically speaking, dark matter is a hypothetical type of matter, however it’s existence is accepted by most of the astronomic community. Researchers at the Waterloo University captured the image of the dark matter “bridge” for the first time.

The researchers used weak gravitational lensing to create a composite image of the dark matter. Gravitational lensing is an effect predicted by Albert Einstein that causes light to bend between the observer and a distant light source, distorting the background image and allowing for it to be observed.

The image of the “bridge” was made from the combination of more than 23,000 galaxy pairs, spotted 4.5 billion light-years away (for reference – 1 light-year is 5.9 trillion miles). Results indicated that the dark matter filament was stronger between the galaxies that were less than 40 million light-years apart.

Hudson and Epps’s paper documenting this discovery serves as a foundation for future filament studies. With the increase of ground-surveys, planned space exploration, and statistical power, researchers are hoping for an increased understanding of the nature of dark matter filament. 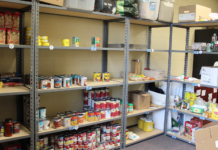