Run by the Thayer School of Engineering at Dartmouth, the competition, which is part of the Society of Automotive Engineers Collegiate Design Series, tasks teams of students from around the globe with designing, funding, and building their own purely electric or hybrid-electric formula-style car over the course of a year.

Competing within the bounds of a strict set of rules and conditions, Waterloo Hybrid tested the performance of their race car against 27 other universities at the New Hampshire Motor Speedway from April 27-30.

Despite being a relatively young team — they started competing in 2011 — Waterloo Hybrid jumped two spots from third place last year, outranking contenders Carnegie Melon, Tufts, and McMaster University, as well as competitors from further afield such as the NITTE Meenakshi Institute of Technology in India and Atilim University in Turkey.

The team’s record was set in the most challenging leg of the competition: the endurance event. Despite their resounding victory they fell short of their personal goal due to a blown gasket.

The success of the team can be credited to 38 UW students from a variety of disciplines, but primarily mechanical and mechatronics engineering. The team also had varied levels of experience, from first-year undergrads to a full-fledged PhD student acting as mentor.

The entire car was developed from the ground up by Waterloo Hybrid.

“Everything — every single piece is designed from scratch — by us,” explained Rishi Chatterjee, the team’s captain.

The team only just completed the competition, but already has a good idea of where they need to improve and what their plans are for next year. They are excited to take on the challenge of besting this year’s results. 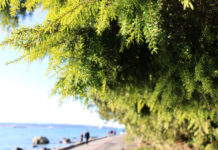 99 Problems but waste ain’t one