No matter how provocatively someone is dressed, they are still not asking for it.

That was the message of the very first Waterloo SlutWalk, hosted by the UW Women’s Centre (WC) Apr. 2. It is a branch-off of the original Toronto SlutWalk in 2011 that was formed after a Toronto police officer told a group of York students that females could avoid sexual assault if they avoided dressing like “sluts.”

“What prompted [us] to bring SlutWalk to UW was the fact that there’s a lot of rape culture on campus, which I don’t think is a surprising fact considering we are a STEM school,” said WC co-ordinator Erin Perri. She added that UW is one of the only schools in Ontario to have a higher male to female ratio.

Brightly coloured signs with phrases like “the length of my dress does not mean consent” and “still not asking for it” were carried through the walk.

The night before the walk, WC hosted Heather Jarvis, the organizer of the original SlutWalk for a discussion about the walk, rape culture, sexual assault, and reclaiming words like “slut.”

“We got angry,” said Jarvis of what motivated them during the first SlutWalk. “Anger is my fuel. Whether that’s good or bad, being angry gets me to do shit.”

Jarvis spoke of her own experience with sexual assault and said that the SlutWalk has helped her deal with her own “baggage” around the subject.

Much of the discussion with Jarvis centred on issues with society tolerating rape culture and other issues like white privilege, sex workers’ rights, and colonialism.

“The more you allow certain activity, the more it is justified and can lead to violence and rape,” said Jarvis. She added that part of the fight to end sexual assault is connecting the dots between street harassment, like catcalling and rape.

“Justifying and normalizing violence are a huge part of the problem,” said Jarvis.

Jarvis said that when the first SlutWalk took place, it wasn’t intended to be an annual event that happened anywhere other than Toronto. Now, over 250 cities globally have hosted SlutWalks at varying times of the year.

SlutWalk holds a similar mission to another walk to end sexual assault, Take Back the Night (TBTN), which is hosted by the Waterloo Region Sexual Assault Support Centre each fall. Despite having a similar goal, the two walks are worlds apart.

“It’s a more brash, in your face and fun kind of thing,” Perri said of SlutWalk. TBTN is a more solemn event as it commemorates a time in the UK when a curfew was imposed on women in attempt to prevent sexual assault.

“We have to have times to celebrate,” said Jarvis on how SlutWalk is an event to celebrate sexuality and sexual rights and freedoms.

Another difference of the two is that SlutWalk allows both men and women to participate as both can be subjected to victim blaming and slut shaming.

Erin Williams, social director for the WC took the reigns on planning the walk, which began this past January. 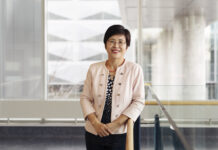