Their efforts turned out to be unsuccessful as the Warriors were defeated by the defending national champion Mustangs in two games, with their final one happening Feb. 27 at CIF Arena. Waterloo’s first loss came Feb. 25 in London, losing by a very close 1-0 margin. Two days later, they would suffer another loss, this time being outscored 4-0 in an exciting game that was far closer than the final outcome would hint.

The lack of goal scoring was not due to a shortage of effort, but that MVP Western goaltender Kelly Campbell was a brick wall for the entirety of both games, stopping every shot Waterloo could muster and frustrating the offence to no end.

“We were expecting it to be tough around the net, especially with [Campbell] in the pipes. She can win the series for you and it was a battle,” said women’s hockey team head coach Shaun Reagan.

Waterloo also entered the series with their leading scorer, Rachel Marriott, out of commission. Inclusion of the forward could have tipped the offensive scales in the Warriors’ favour.

“Missing Marriott was tough for us. To take her out of the lineup was a big hit … We needed to step up,” Reagan said.

The first game in the series was a grindy, defensive duel that saw low shot totals and a low final score. The only goal of the game was scored late in the first period by Mustangs forward Evra Levesque. The play started as a fairly innocent retreat into the defensive zone by the Warriors defensemen, but an aggressive forecheck by Mustangs forward Lyndsay Kirkham led to a turnover that, after a desperate scramble to regain control of the puck by Waterloo failed, and ended up on Levesque’s stick just below the slot. The shot clearly surprised Waterloo senior goaltender Rebecca Bouwhuis, who didn’t have any time to react before the puck was in the back of the net.

During the second period, play was largely controlled by the Mustangs, who spent a lot of time in the Warriors zone. Despite this pressure, they weren’t able to get many shots through Bouwhuis to increase their lead. Shots at the end of the second were 16-15 in favour of Western, a sign that the game could still have easily gone either way.

Waterloo woke up in the third frame and dominated their opponents, who were desperately clinging on to their single-goal lead. Waterloo did their best to pour on pressure in the effort to score on Campbell, but brilliant play by the Mustangs netminder and strong defensive efforts from their skaters ultimately denied any chance to come back from the small deficit.

“They didn’t give up a lot and when they did they came up big with blocking some shots,” Reagan said.

Campbell snagged the 23-save shutout, Bouwhuis stopped 18 of 19 shots, and third-seeded Western came to the CIF Arena Feb. 27 with a 1-0 series lead and a chance to eliminate the Warriors.

“In the first game I thought we could have done a better job in the neutral zone, creating offense from there early on … We tightened that up and started playing a better game later,” Reagan said.

The second game started out much like the first: slow, defensive, methodical, and low risk. Western came on strong out of the gate, controlling the puck and applying pressure onto Waterloo, with a few breaks in between stretches of zone time for a quick Waterloo rush the other way.

These rushes were often thwarted by a strong Western defence that didn’t allow too many chances. Western struck first roughly halfway through the first on a screened shot from the point that beat Bouwhuis to put the Mustangs on top. Roughly a minute after the first goal, Western struck again on a point shot off the faceoff that was tipped into the Waterloo net by Marlowe Pecora to leave the Warriors down 2-0 after 20 minutes.

After a relatively slow first period, the rest of the game seemed to open up as the home team tried to even the score. An early goal 13 seconds into the period increased Western’s lead to 3-0, but Waterloo managed to bounce back and take over the reins for the remainder of the game. Puck possession was overwhelmingly tipped in Waterloo’s favour. Even though Western was playing relatively passive, the Warriors looked out of sync. Passes were not connecting very well, turnover opportunities were missed, and bounces just generally weren’t going the way of the home team. Waterloo was still outplaying Western, but missed chances to make the Mustangs pay for their mistakes — something Waterloo simply couldn’t allow happening any longer. Through all of this, Waterloo still got their fair share of shots and scoring chances but remained frustrated by the Campbell’s exceptional play.

ly goal in the second. “If it was 2-0 and we get one and now it’s 2-1 and we go into the third we’re looking pretty good. When they’re up by three, it’s really tough but I thought our girls responded outstandingly even after a goal like that.”

The third period started as the home team’s last chance to tie up the score and live to move on to game three. Western played an exceptional defensive game, locking out periods two and three but not posing too much of an offensive threat. In the final 10 minutes, Waterloo was putting a ton of pressure onto Campbell, but she would not relent. In an effort to try to get at least a single goal, Warrior defenders peppered the net from the point to try to get a screen on Campbell or a rebound in front of the net. Neither strategy really worked because of Western’s commitment to block any and all shots fired from the blue line.

It would be Levesque, the lone goal scorer from game one, who would put the final dagger into Waterloo 13:26 into the final frame and solidify Western’s victory in the series. Shots at the end of the game were 37-23 in favour of the Warriors, with Campbell taking the shutout.

“We just kept playing our game and kept going at them and we just couldn’t find anything,” Reagan said.

The main story of this series wasn’t Waterloo’s lack of offence. There were multiple opportunities in both games that should have or could have resulted in goals, but bounces either did not go their way or Campbell was there to stonewall them with no chance of a rebound.

“That was our gameplan, to go in and get pucks to the net and get screens … and get some second opportunities, and I thought we did just that,” Reagan said.

Western put on a defensive clinic throughout the series, thwarting Waterloo rushes, blocking shots, or forcing turnovers that would require the Warriors to reset their positions in the offensive zone. Such a strong defensive series from both teams came as a little bit of a surprise, as Waterloo and Western were ranked ninth and tenth, respectively, in goals scored per game in the entire CIS. A ridiculous showing by Campbell gave Western the edge they needed in order to defeat the Warriors in such a defensive battle.

Through our Waterloo Windows: Lifting Spirits and Keeping Communities Together 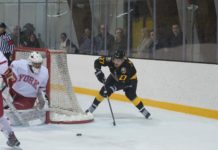 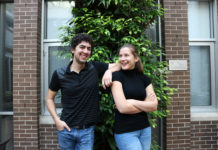