After earning their first top-10 CIS ranking in program history, the Warriors women’s hockey team turned in a less than convincing performance against the York Lions, grinding out a 2-1 victory in double-overtime at the Columbia Ice Field Arena.

The Warriors dominated the beginning of the game, opening the scoring at 3:24 of the first period. Fourth – year Rachel Marriott recorded her team leading the 12th point of the season, scoring a power play goal from Michelle Tanel and Rebecca Rutherford. Persistent pressure gave Waterloo a 7-1 shot advantage through the first six minutes of the game.

Warriors goaltender Stephanie Sluys continued her superb start to the season. Going into the game, she led the OUA with 1.16 goals against average and was second in the league with a .950 save percentage. She stopped all six shots she faced in the opening frame and Lions’ keeper Lauren Dubie made some spectacular saves to send the game into its first intermission with the Warriors holding onto a 1-0 lead.

Waterloo started the second period strongly, but a tripping penalty to Alison Hanson at 6:47 changed the momentum of the game. The Lions outshot the Warriors 8-6 in the second frame and if not for a great Sluys save on a two – on – one, the Lions would have gone into the second break level.

The Warriors could not keep the Lions out of the net for long in the third. A scramble power play goal at 1:32 knotted up the game at ones. York was by far the best team in the third period, the Warriors failing to record a shot in the 20 minute period.

The slump continued into the first overtime period, where the Warriors did not record a shot until a weak wrist shot with three seconds left in the session. Waterloo could not convert in the 11 seconds they were given after a York hooking penalty late into the five minute overtime period.

The Warriors finally broke through after a dominant second overtime period on the power play, Angela MacDonald scoring the winner from Hanson and Amy Barnard.

All three goals came on the power play; the Warriors were two for five on the advantage and York, one for four.

The Lions outshot the Warriors 25-21 over the five periods.

With the win, the Warriors move to 8-3-0 on the season, good enough for third in the OUA.

“I think there were times where we got out battled and it got messy towards the end, but we have a strong group of girls that know the system and we were able to pull through at the end and get the win,” said MacDonald.

The Warriors have two more games before the winter break, a two match weekend starting Nov. 26 at home against the Western Mustangs and Nov. 27 in St. Catharines, taking on the Brock Badgers.

A Good night at Maxwell’s with Matthew Good

No parents, all fun: The Lego Batman Movie

B.U.D.: A rockstar on the rise 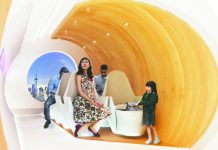 Waterloop going forward with its goal 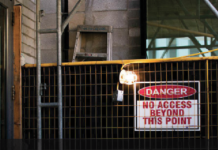 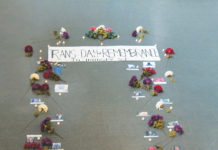 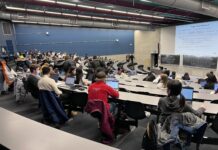