Located at 170 Columbia St. W, the primary location hosts 15 stations for customers to game. In the upcoming weeks, a second location at Waterloo’s Boardwalk will have three stations open to the public.

During two promotional dates, five games were offered to patrons, including immersive shooters, a tower defense, and one level of a new horror game, pulled from Steam games compatible with VR. The arcade does have a larger selection of games, but these five games were demonstrated for quick turnarounds so as many people as possible could experience VR.

Ctrl V had an open house on May 28 allowing the public to visit and try out VR for free. At 9:30 a.m. there was a line out the door as people waited for their chance to experience VR.

Ctrl V has partnered with the University of Waterloo’s Games Institute. By partnering with a corporation, the Games Institute is awarded more grants. More grants results in more gaming, benefiting both parties. “We’re going to provide them with in-kind services,” Robert Bruski, CFO of Ctrl V, said, “and hopefully benefit from some of the research as well.”

According to Neil Randall, director of the Games Institute, both students and faculty will utilize Ctrl V’s assets for research. Randall is hoping to study how 3D immersive worlds will affect storytelling in society.

Ctrl V also has an unofficial partnership with the HTC Vive, as Ctrl V is the first corporation to purchase their VR headset in high quantities. “We’re discussing now to make it an official partnership,” Bruski commented. “Maybe [we’ll] be a reseller … because as we try to franchise this we are going to need to be able to procure these things.”

When asked about his thoughts on a VR arcade, Rob Brunet, a concept artist at Ctrl V, commented, “It’s the new way of gaming for sure. For my first experience it was very intuitive. I’m not a big gamer and I’ve always found the joysticks very confusing. I’m not very co-ordinated, but everything you do in real life you’re doing in the game, so it’s really easy to get the hang of, even on the first try.”

When asked about what it was like playing VR games, one customer said “It’s totally fun. Awesome experience.” They also commented that they would likely return to play other games and would be interested in other, non-gaming software.

Ctrl V, and VR in general, isn’t just for gamers. There is also creative software that will be available. A program developed by Google called Tilt Brush is a VR-based 3D canvas, where a person can paint or sculpt in 3D space.

VR is being considered the next step in gaming and many believe it is only a matter of time before VR breaks into the movie industry. There are VR supported YouTube videos, many of which can be found under the channel “360o YouTube.” The medium, however, does not have a large reach in popular culture currently.

Many associated with Ctrl V are optimistic. “I see [VR] being applied to all other mediums,” Brunet said, “Like in film and in theatre. Just like a more immersive experience and allowing the viewer to control what they’re seeing.”

Watch below at 0:59 to see our reporter's experience: 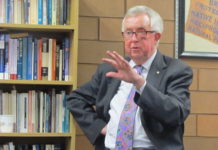 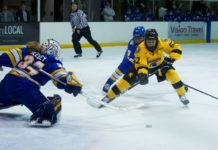