I just finished a five-year English co-op program in April.

I came to UW wondering what was in store for me as a student.

I never really gave much thought to what co-op would be like until my second year, when I got my first co-op placement with Humber College.

I was going to work in the Writing Centre as a tutor, and I was beyond excited.

However, I was also beyond nervous about what co-op would be like as I had only worked in freelance tutoring and waitressing up until that point.

It took some time to find a place before we started, but eventually my roommate (and co-worker) and I found a place together.

During the first two months of co-op, we got to know each other really well because we didn’t do much else after work. We were lucky that we were very similar and got along well. I’ve lived in and witnessed situations where this didn’t work out, so it was surprisingly nice that she and I created a welcoming, friendly place to call home.

On my first day at my co-op, I was assigned the morning shift at the centre, which involved being responsible for opening the centre and preparing for the first appointments and drop-in students.

I was almost immediately treated like a professional, something I was not used to experiencing.

Some co-ops treat you differently because you are a co-op, and they will often give you smaller jobs at first, gauging your skills, and sometimes they will give you more responsibility.

However, I have rarely seen first-time co-ops get the responsibility I had. I was quite lucky to have a good boss-employee relationship.

My boss and I often got into work at the same time on different buses, and one day we raced each other into the centre, the winner receiving a chocolate bar. I won, and he held up his end of the deal. Franc, if you’re reading this, you’re a real one!

A typical day began with me waking up at 6:30 a.m., snoozing my alarm until 7 a.m, running around getting ready, and then bussing to work.

I worked from 8 a.m. until 3:30 p.m. tutoring students and teaching one on one courses with two breaks and a lunch.

Then I would go home, nap for a bit, then make dinner before my coworker/roommate got home.

We would often watch Cutthroat Kitchen while we ate our dinner. Then I would shower and attempt to sleep before midnight but almost always failed to do so.

It was strange because even though I was a mess, I was slowly getting a routine and getting my life together.

Once I met more people and felt more secure, my roommate and I started going out of the house more.

We went and explored downtown Toronto, went shopping, saw movies, and had people over for dinner a lot. I also started doing more things on my own and gained confidence through the process.

And then, as soon as I felt confident and comfortable, I had less than a month left before I had to move back to school and change my whole life around again.

Coming back to school after co-op was a shock.

It was hard to create a solid routine while taking oddly-timed arts classes instead of a regularly-scheduled shift.

I had moved back to residence as well, so losing my freedom to cook when I wanted, and eat what I wanted, was difficult to adjust to.

I learned a lot in that first co-op, and it carried over into my future co-ops. I returned to Humber for a term and lived with my aunt and uncle.

The next co-op took me to Nokia in Ottawa, my first big move. Then I returned to Ottawa for my final co-op terms and spent 8 months at IBM.

Most of my days were like the Humber days. I woke up early, commuted to work, came home and did nothing for a while.

However, as each term progressed, I created a routine, met new people, and became more comfortable.

I learned more and more about what keeps me healthy and happy while away from school and my usual support system. These are the most important lessons I learned while away:

1. Your first month (at least) will be an adjustment period, both to the new job and the new routine. You are not expected to have it all together right away, and you are there to learn. Let it happen.

2. Your home while on co-op needs to be a place where you feel comfortable, since you spend most of your time there. Make your room your sanctuary, even if that means a longer moving process. I always brought a lot of posters and knick knacks to make my apartments feel like home.

5. Remember that although you’re often doing things alone, that doesn’t mean you’re totally alone. Keep in contact with your friends and family and maintain a good support system so you stay mentally healthy. 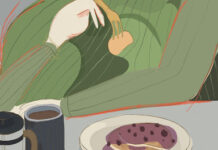